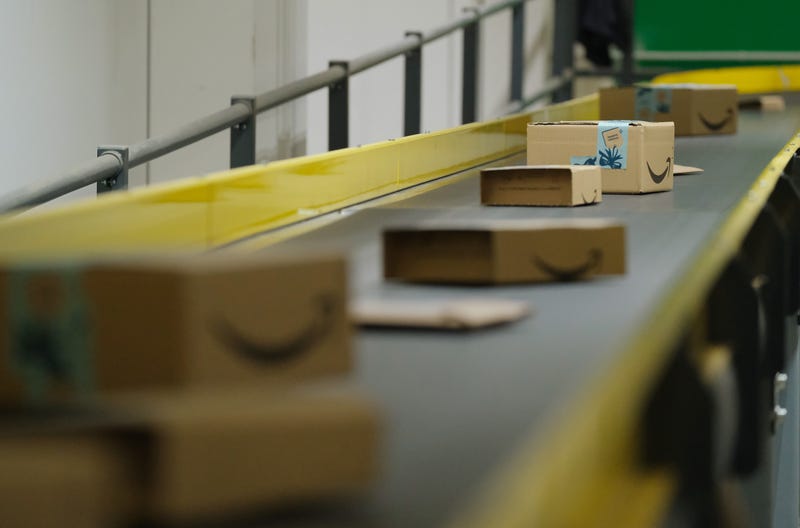 BRIESELANG, GERMANY - NOVEMBER 28: Packages flow along a conveyor belt at an Amazon packaging center on November 28, 2019 in Brieselang, Germany. Amazon is anticipating a strong holiday season and has hired extra workers at its packaging center across Germany. Meanwhile workers at some of the centers, though not at Brieselang, have announced strikes to further their demands for better pay. Photo credit Sean Gallup/Getty Images
By City News Service

LOS ANGELES (CNS) - A former Amazon.com Services manager is suing his ex-employer, alleging he was wrongfully fired earlier this year for recording security video footage of an employee being required to work beyond her normal hours without pay and for helping a second worker report she was being sexually harassed by another manager.

An Amazon representative could not be immediately reached.

Lu was hired in October 2020 as an area manager, performed his job well and cared for the well-being of the 70 employees he oversaw, the suit states.

Shortly after he was hired, Lu discovered that another department's manager was requiring employees to work beyond their normal hours without pay, the suit states. Last November and December, two Amazon employees confided in Lu that the other manager had attempted to force them to work off the clock, but they refused, according to the lawsuit.

Lu observed security footage showing one worker on the job outside her work hours, and he confirmed this through her time card, the suit states. Lu recorded the security footage to show his supervisors that a Labor Code violation allegedly had occurred, according to the suit.

After Lu told his direct supervisor, an Amazon operations manager, about what he had seen, the boss asked him for more clarification about how he obtained the information and "warned him that digging into such issues could get him in trouble," the suit states.

About a week later, an Amazon senior operations manager called the plaintiff into his office and asked about the alleged workplace violation and for his proof it occurred, the suit states. Lu's boss and the operations manager agreed with the plaintiff that what he saw was a serious offense and assured him that the company would investigate, but also both told him to "focus on his job" and not investigate his fellow managers, the suit states.

In alleged retaliation for coming forward about what he had seen, a human resources representative in January asked him about the alleged workplace rule infringement, queried him about who gave him access to the security video and questioned him why he had recorded the footage, according to the suit. She instructed Lu to write an account of the incident and how he had obtained the video evidence, the suit states.

The human resources representative "indicated that Lu's actions in investigating and complaining of the violation would make him a target of termination," according to the suit.

In his statement, Lu explained that he had recorded and reported the incident because he understood that what he saw was a violation of California labor law and he wanted proof to show his direct supervisor, the suit states.

Lu found out a week later that he was being investigated for having the recording of the surveillance footage and he was given a written reprimand, the suit states. He received a final written reprimand on Feb. 4 for taking photographic evidence in violation of Amazon policy, despite having never received a warning or write-up for any other past incident, the suit states.

"Mr. Lu was shocked because he had only recorded the video to show his superiors ... and had only intended to help the company remedy a violation of law," the suit states.

In March, Lu reported to his immediate supervisor that a female employee told him that she was being sexually harassed by another manager and he later gave the information to human resources, but Amazon took no action against the alleged offender, the suit states.

The same day he reported the information to human resources, the department's manager called him into her office, where she asked him if he recalled making inappropriate comments about a co-worker's physical disability, the suit states. After Lu said he would never make such remarks, the human resources manager asked him to "think hard” about whether he had ever used the "N-word" to refer to a colleague, which Lu also denied, according to his complaint.

Nonetheless, Lu was suspended for allegedly making racial comments and he was fired on April 15, the suit states. He was told by the human resources manager that he was losing his job due to his alleged violation of Amazon’s anti-harassment policy, but he was not given any specifics, the suit states.

Lu believes the human resources manager told other Amazon employees that the plaintiff was fired for allegedly violating the company's anti-harassment policy and for making racially insensitive remarks, the suit states.