A teenager from Chatsworth is spending her down-time during the pandemic gathering shoes for the homeless. She's our KNX Hero of the Week, and she's helping others put their best foot forward!

Shoes for Souls began a few years ago, when Lindsay Sobel was turning 13.

"Part of the requirement for having a bar or bat mitzvah, is that in some way you give back to your community, give back to the world," explains 17 year-old Lindsay Sobel. "I decided I wanted to give back as big as I could. One day, my dad and I were cleaning out our closet. We are a family of five, and between the five of us, we had about 30 pairs of shoes we wanted to give away! We thought [surely] there are a bunch of other families just like us. So, I created Shoes for Souls, and since then it’s kind of taken off!"

At this point, Lindsay has handed out over 30,000 pairs of shoes to the homeless. "I didn't realize how much shoes meant to me, and how much they meant to other people. I couldn't imagine walking around the city without shoes on!" says Lindsay. "Just think about how many different feet problems they must have, too." 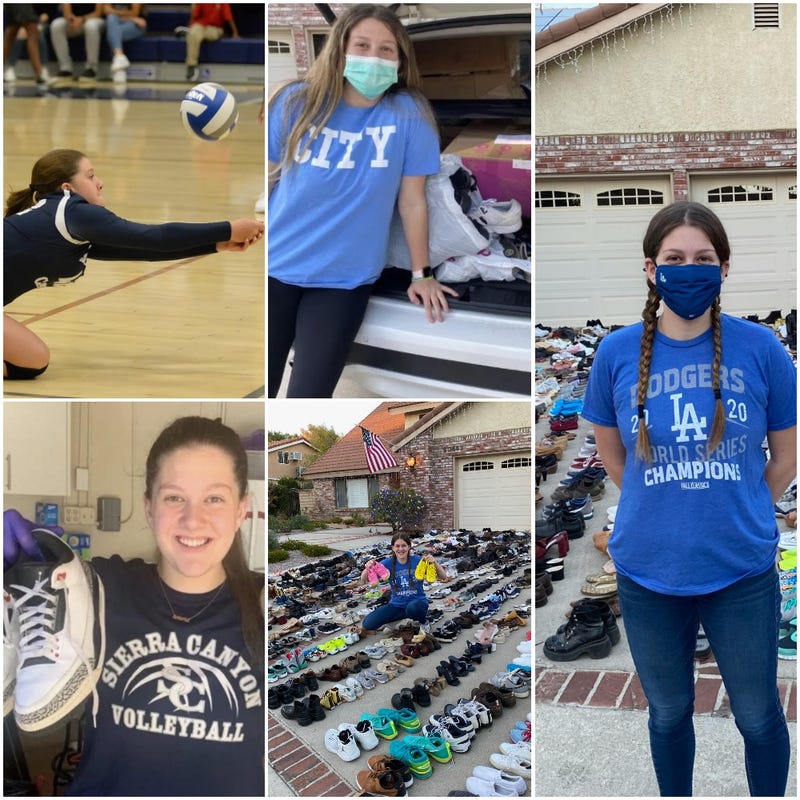 Along the way, Lindsay has worked with local leaders, like Los Angeles City Council Members John Lee and Bob Blumenfield. Both have helped her get shoes to those who need them. And, people from all over have donated, including classmates at Sierra Canyon, teachers, and parents.

Even her teammates. "I went to my club volleyball team, and from them I got about a thousand pairs!"

This past Thanksgiving, the Sierra Canyon High School junior put a notice on the "Next Door" app, and got a huge response. "I got about 3,000 pairs, just from my neighbors," says Lindsay, who gathered the shoes over the holiday weekend.

David Sobel says he's very proud of his daughter, who took the initiative to make a difference. "It's just something really special. It's Lindsay just being Lindsay. She's always had that soft spot in her heart. And, I think Lindsay knows that what she's doing is creating an impact on so many people's lives."

Lindsay says it just makes sense to help those who are without. "It saddened me, just seeing how big the problem is. But it also made me proud of not only myself, but my community as whole.”

17 year-old Lindsay Sobel is our KNX Hero of the Week! She’s helping thousands of homeless people take a step forward with proper shoes.

"That one pair of shoes could change someone's life," remarks Lindsay.

If you would like to know more about Lindsay’s charity Shoes for Souls, or to donate a pair of new or gently-used shoes, click on this link: https://shoesforsouls.com/

You have someone you’d like to nominate as an upcoming KNX Hero of the Week, go to https://knx1070.radio.com/nominate