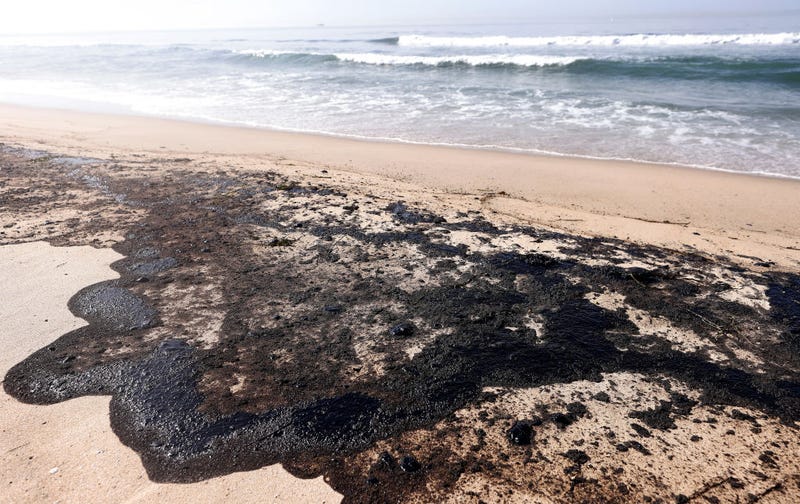 Oil is washed up on Huntington State Beach after a 126,000-gallon oil spill from an offshore oil platform on October 3, 2021. Photo credit Mario Tama/Getty Images
By Daniella DeRobbio, KNX 1070 Newsradio

Officials identified a general point of origin for the crude oil spill Monday—a ruptured pipeline. The leak diluted ocean waters off the coast of Orange County with an estimated 126,000 gallons of crude oil.

Divers, who inspected more than 8,000 feet of pipe, isolated one area of “significant interest," Martyn Willsher, CEO of Amplify Energy, the company that owns and administers the pipeline, said Monday. “We did this primarily through [remote vehicles] to this point but we are sending divers down now to verify what we were seeing. There’s more information to come but I think we’re moving very closely to the source and the cause of this incident.”

Wilsher hypothesized that a ship's anchor hitting and puncturing the pipeline was “one of the distinct possibilities” investigators were considering as the root of the oil catastrophe.

Looks like a bunch of crew members in Hazmat suits along the ocean in #HuntingtonBeach. #OilSpill @KNX1070 pic.twitter.com/9cgMndtR1v

“We continue to do overflight assessments of the coastline,” said U.S. Coast Guard Captain Rebecca Orr. “We know that there is oil off the coastline. Many of you have seen it showing up on the beaches in the forms of small quantities. We call them tar balls or patties. It’s the sticky oil that gets caught in the sand.”

This is a developing story. KNX will update with additional information as it is received.

You can see the oil from the big #OilSpill in a pool of water near the shoreline. And they have boom in place to help contain and remove the oil. #HuntingtonBeach #NewportBeach @KNX1070 pic.twitter.com/EMVT7pTI9X