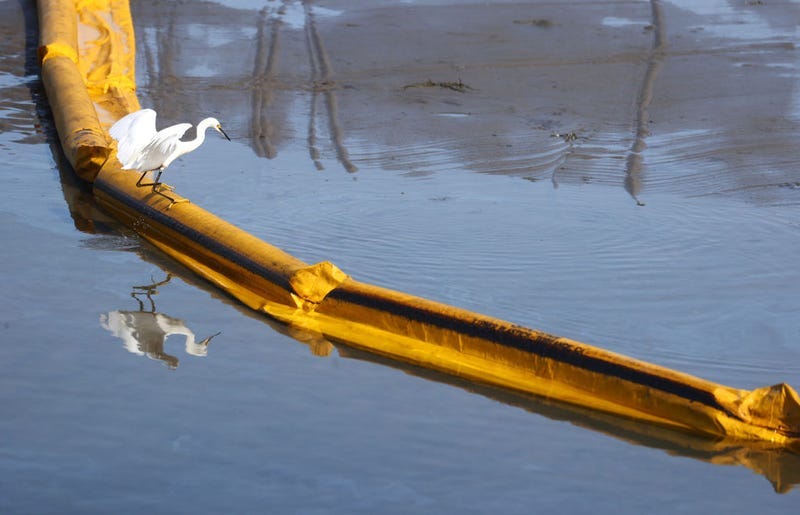 A bird balances on a boom intended to contain oil from seeping into the Talbert Marsh, home to around 90 bird species, after a 126,000-gallon oil spill from an offshore oil platform on October 3, 2021. Photo credit Mario Tama/Getty Images
By Daniella DeRobbio, KNX 1070 Newsradio

Of the 82 birds and fish recovered by a wildlife group after the O.C. oil spill, more than half did not survive, according to the Oiled Wildlife Care Network.

The group said it found 73 birds, but at least 45 of them have died so far. Animal experts also discovered nine dead fish in the oil spill,

The network has been working to help rescue animals since the oil spill began. Veterinarian Michael Ziccardi, who heads the wildlife network, said they deployed a field team to scour the coasts to look for any animals covered in oil.

Remember the oiled Ruddy Duck recovered from the Orange County spill site last week? After a thorough washing and days...

While Steel has kept mum on the topic banning offshore drilling she did announce a proposal named the Stopping Hazardous Incidents in the Pacific Act of 2021 (or SHIP Act), which would prohibit ships from being near or anchoring within “24 nautical miles” from the OC coast.

The recent oil spill has devastated our beautiful coastline, CA residents, & small businesses. I called on Governor Newsom and President Biden for disaster relief as the spill has caused tremendous damage and poses a great threat to public health.https://t.co/OXwALJLHn4

Aaron McCall-a federal advocacy coordinator for California Environmental Voters- argued that Steel's proposed legislation was "not only deeply irresponsible, it's the policy proposal that's basically the equivalent of saying people's faces should stay out of the way of someone's fist,” according to NBC 4.

McCall said the only solution was to ban offshore drilling.

People are worried of course about the effect of the #OilSpill on wildlife. The oil has spilled onto the sand in #HuntingtonBeach and dead fish and birds have washed ashore. @KNX1070 pic.twitter.com/I1rrZfYbJL