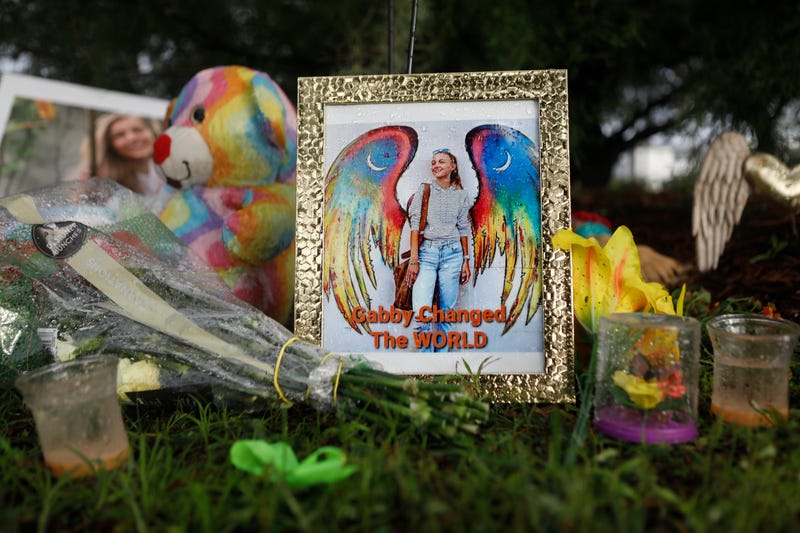 SEPTEMBER 21: A makeshift memorial dedicated to Gabby Petito is located near the North Port City Hall on September 21, 2021 in North Port, Florida. The body of Petito was found by authorities in Wyoming, where she went missing while on a cross-country trip with her fiance, Brian Laundrie. Law enforcement agencies are for searching for his whereabouts. Photo credit Octavio Jones/Getty Images
By KNX 1070 Newsradio

As the Gabby Petitio case grabs headlines in news outlets across the country, activists and scholars are calling attention to the fact that missing people of color do not receive the same level of coverage.

Joy Reid, host of The ReidOut, addressed the case and the national attention on it on Monday night. Shesaid that while Petito’s family deserves answers and justice, “the way the story has captivated the nation has many wondering why not the same media attention when people of color go missing? Well, the answer actually has a name: Missing White Woman Syndrome.”

In fact, where Petitio was found, Wyoming, only 18 percent of indigenous female homicide victims receive newspaper coverage, according to a state report. That’s compared to 51% of white female and male victims.

“No one is looking for us.” With all the coverage on the Gabby Petito case, Joy Reid calls out the media’s obsession with missing white women, and calls it “missing white woman syndrome”. pic.twitter.com/FPbA3bHjNq

“Missing White Woman Syndrome” is a term coined by late journalist Gwen Ifil in 2004 at the Unity: Journalists of Color conference.

“If there’s a missing white woman, you’re gonna cover that every day,” Ifil said at the conference.

Slakoff researched the differences in media coverage of missing white women compared to women of color.

“I found in my research with Dr. Pauline Brenan that Latina and black women and girls were more likely to be portrayed in an unsafe environment, a bad neighborhood. And we argue that that type of narrative actually normalizes and trivializes their victimization,” she said.

Dr. Kaye Wise Whitehead, associate professor of Communications and African American Studies at Loyola University Maryland, told Insider that women of color “are not seen as damsels in distress. There are of tropes around the 'angry Black woman,' 'the strong Hispanic woman' that we don't have to be lifted up, protected and centered.”

So why does the media have this fixation on missing white women? Well for one, according to Slakoff, it likely starts in the newsroom.

According to the 2018 Columbia Journalism Review Report, less than 17 percent of newsroom staffers are minorities.

Slakoff wants to make it clear she Is not saying Gabby Petito doesn't deserve the media attention.

“What I am saying is that other missing women and girls also need this attention,” she said.