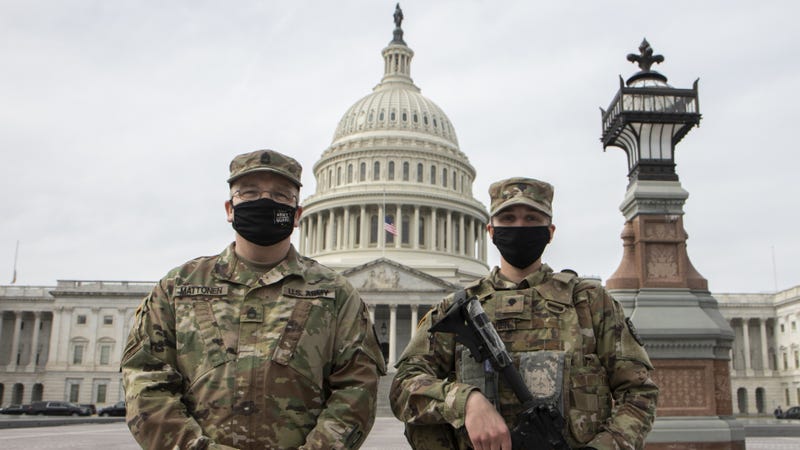 "Keeping families involved is important to the success of all our Soldiers," said 1st Sgt. Phillip O'Neill with Forward Support Company, 107th Engineer Battalion, Michigan Army National Guard. "Our families back home need reassurance that, not only are we making a positive impact here in Washington, we are staying safe and healthy."

This focus on family involvement is demonstrated by two of the unit's Soldiers in particular.

The Mattonens joined the rest of FSC, 107th, based in Marquette, Michigan, to answer the call in the U.S. Capitol twice in January. Initially, they provided support during the presidential inauguration. After going home, they returned to Washington as part of the follow-on mission helping the U.S. Capitol Police.

The father-daughter duo drives the same truck and distributes food to thousands of troops in the Washington area as part of Joint Task Force Independence, consisting of National Guard Soldiers and Airmen from multiple states and territories.

"It is so nice driving in the same food delivery truck," said Carl. "I love that we work together as professionals, but we have been too busy to see the sights yet. Obviously, we share a personal family relationship, too. We keep each other informed about work while staying updated on family life back home."

Having that connection and ability to share work and family details also helps them stay focused on their mission, a key element of success for the task force. 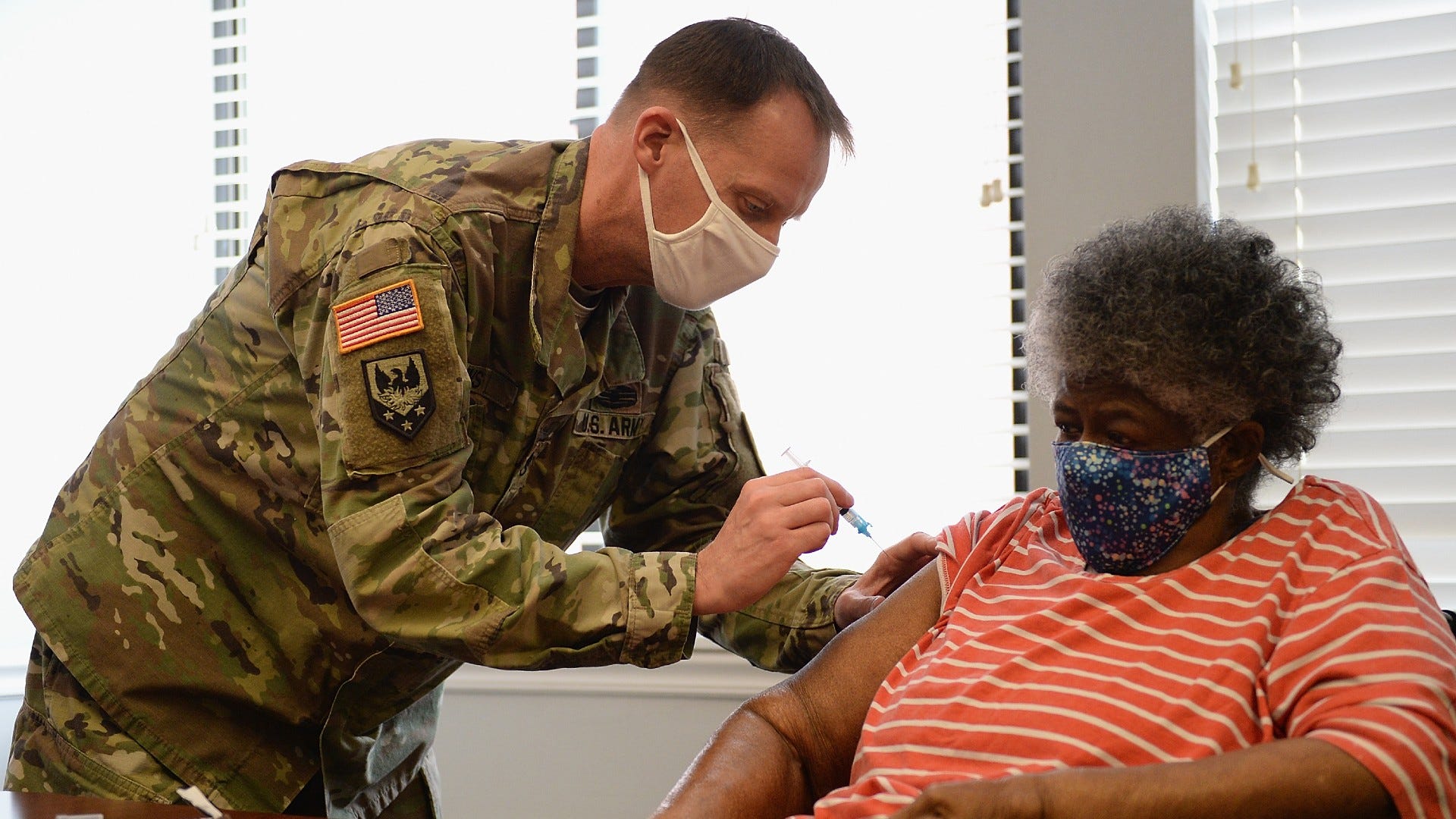 Carl has been in the military for 37 years, the first 12 in the active component. Then he joined the Michigan National Guard and deployed twice overseas to Iraq, once in 1990 during Operation Desert Shield/ Storm and again in 2009 during Operation Iraqi Freedom. His first company commander in the Guard was current Maj. Gen. Paul D. Rogers, the adjutant general of the Michigan National Guard.

"He was a high-speed captain back then," said Carl.

Throughout his career, Carl has primarily served as a combat engineer. However, he possesses multiple skill sets as a wheeled vehicle mechanic, construction equipment repairman, power generation mechanic and self-propelled howitzer repairman.

If it needs maintenance or repair, he can probably do the job.

"Taking classes and getting trained has many benefits," said Carl. "I even served as an instructor for a while. But mostly, I enjoy keeping our equipment and vehicles running. It's also what I do on the civilian side as a permanent technician maintaining all military equipment, generators and trucks in Michigan's upper peninsula." 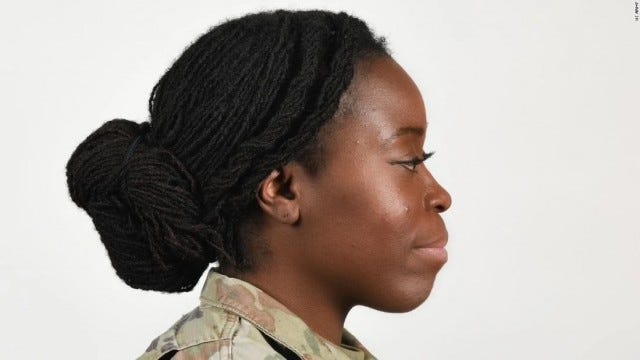 Carl and his wife have three daughters and two sons. He is careful to balance his busy military life with family needs, but it is not always easy.

"Sometimes I don't have as much time to spend with family due to military commitments," he said. "But I feel like we've been able to strengthen our bond since Carlie decided to join the Guard. It also makes me proud that my kids can service and maintain their vehicles and snowmobiles. I'd like to think they got those traits from me."

Carl said sharing a deployment with his daughter is very special. They talk after work and relieve stress by watching movies together. This is very different from his prior deployments to Iraq.

"It's easier when there's family here," Carlie agreed. "If I feel lonely or I need to talk to someone, my dad is nearby. I can just go right down the hall, spend some time with him and it feels a bit like home."

Part of being able to spend time together like that was by design.

"When the commander and I discussed the work-rest cycle for this mission, we thought it was important to ensure we gave Carl and Carlie time off together so they could spend time with each other as family," O'Neill said.

This type of consideration, he said, leads to happier, more productive Soldiers.

Carlie joined the Michigan Guard two years ago as a senior in high school and received training as a unit supply specialist. After serving in a different unit, she transferred to the FSC, 107th, to be closer to her dad.

The balance between military and civilian life is easier because of family, she said, adding the Washington mission came as a surprise.

"I'm missing winter semester at Northern Michigan University because of this mission," Carlie said. She is in her third year of study in surgical technology.

"But this is what I signed up for," she added. "Yes, it's not the most convenient timing, but I'm grateful to serve together with my dad, and I can just go right back to school once the mission is complete."

"There's a lot of negativity on the news sometimes," he said. "But my daughter and I see firsthand the amount of positive, hard work the National Guard is doing here in Washington."

Carl said he's excited to help meet Soldiers' needs, and his desire to serve goes beyond the current mission.

"Obviously, I love to serve," he said. "I'll turn 56 years old while I'm here in Washington, and I would really like to stay in the Guard until I'm 60."

"When I joined, I needed work experience and I really wanted the chance to travel," said Carlie. "I've never been to Washington before, so this mission is a great opportunity. I'm not sure if I'll stay in the Guard as long as my dad, but I will definitely shoot for 20 years."

Not only is Carlie a full-time college student, but she also works as a waitress for a Marquette restaurant and a cashier for a grocery store. She shared some advice for others considering a career in the National Guard.

"As long as you have motivation and determination, you will make it through," she said.

Her dad is proud to see her follow in his footsteps.

"It's a special feeling to see her all grown up," he said. "I always tell Soldiers they need to replace themselves before they can leave the military. I'm honored to call Carlie my replacement."