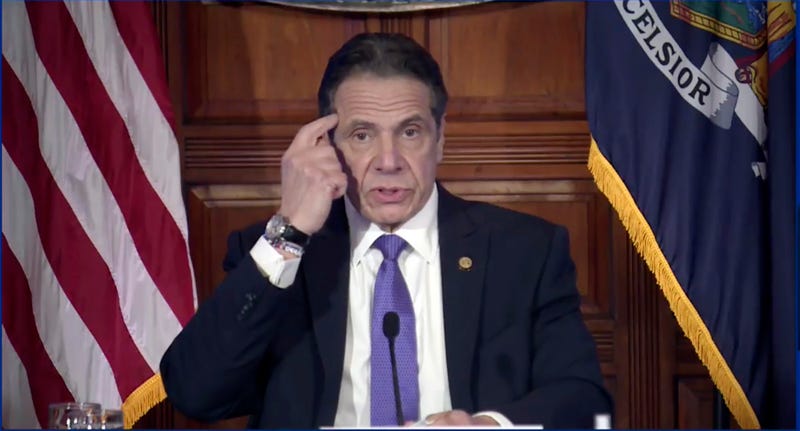 But if the investigation finds evidence of wrongdoing, what then? Who gets to decide what discipline, if any, the Democrat might face?

New York has an impeachment court, last used in 1913, but there are other options, like a public censure, or just letting the matter play out in the court of public opinion.

Here’s a look at what could come next in the investigation:

Attorney General Letitia James said her office will hire a private law firm to investigate Cuomo's conduct and issue a public report. Details, like the scope and length of the investigation are unclear.

The inquiry could just focus on the two members of Cuomo’s administration who said they felt harassed. Or investigators could seek out other women who were made to feel uncomfortable, even those outside the administration.

Former Cuomo adviser Lindsay Boylan says the governor commented about her appearance, summoned her to an uncomfortable private meeting in his office after a holiday party and gave her an unwanted kiss at a meeting in 2018. Boylan also says the administration leaked her personnel files to reporters after she accused him of harassment.

Another former aide, Charlotte Bennett, said Cuomo asked about her sex life and if she had ever had sex with older men, and talked about wanting a girlfriend, which she viewed as the governor asking for a relationship.

A third woman, Anna Ruch, told The New York Times the governor put his hands on her cheeks and asked to kiss her at a 2019 wedding.

The three-term governor has denied touching anyone inappropriately, but acknowledged he does kiss people’s faces as a greeting and has teased people about their personal lives in a way some women interpreted as flirting.

“I didn’t mean it that way,” Cuomo said Wednesday. “But if that’s how they felt, that’s all that matters.”

One possible blueprint for the investigation is one Cuomo himself oversaw as the state’s attorney general in 2010 into his predecessor, former Gov. David Paterson.

Kaye took about four months to issue a report on the domestic violence probe, finding Paterson committed errors of judgment but should not face criminal charges.

WHAT IF INVESTIGATORS FIND WRONGDOING?

Senate Majority Leader Andrea Stewart-Cousins said Wednesday that if the investigation shows something inappropriate did happen, Cuomo should resign.

If Cuomo refused to go, one option could be impeachment.

That process would start in the Assembly. If a majority of members vote for impeachment, a trial would then be held with a jury of senators and Court of Appeals judges. At least two-thirds of the jurors are needed to convict.

New York used this process to oust Gov. William Sulzer from office in 1913.

Sulzer blamed his downfall on the Democratic Party machine of Tammany Hall, and he blasted the court’s secret deliberations: “A horse thief in frontier days would have received a squarer deal,” he complained.

IS THERE A PUNISHMENT SHORT OF IMPEACHMENT?

Either state legislative chamber could decide to censure the governor by majority vote, according to New York University School of Law professor Stephen Gillers.

That would amount to a stern public rebuke, a largely symbolic penalty.

No lawmakers have expressed public support for censuring Cuomo amid the investigation, and there’s no indication it’s being floated as an option down the road.

In 1892, the state Senate censured three senators for refusing to vote on a bill. And in 2007, an assemblyman was censured and lost his position as ranking member on the chamber's alcoholism and drug abuse committee for sleeping at the home of a 21-year-old female intern after drinking at a sports bar together.

Predicting the appetite for a punishment now might be premature, with the investigation still incomplete.

“If there are more stories that come out, depending on who you’re talking to, people may have different sensibilities,” said Assembly member Jo Anne Simon, who chairs the legislative ethics commission.

The governor, like any one else, could face civil penalties if someone sues him for sexual harassment or files a complaint with a state or federal agency.

That could lead to civil penalties, a cease-and-desist order or an order to change his practices.

“Could somebody then bring a lawsuit for civil penalties based on the finding of the (attorney general)?” attorney Richard Rifkin, who was special counsel to the governor in 2007 and 2008 and serves as legal director at the Government Law Center at Albany Law School. “They could.”

HOW ABOUT CRIMINAL CHARGES?

It's also possible that a prosecutor could bring criminal penalties based on the attorney general's report, according to Rifkin.

Harassment could constitute a crime if it involves forcible physical touching of a sexual nature, coerced physical confinement or coerced sex acts.

Cuomo has insisted he didn't touch anyone inappropriately and said if he kissed or touched anyone, it was in the way that politicians have been greeting allies and constituents for ages.