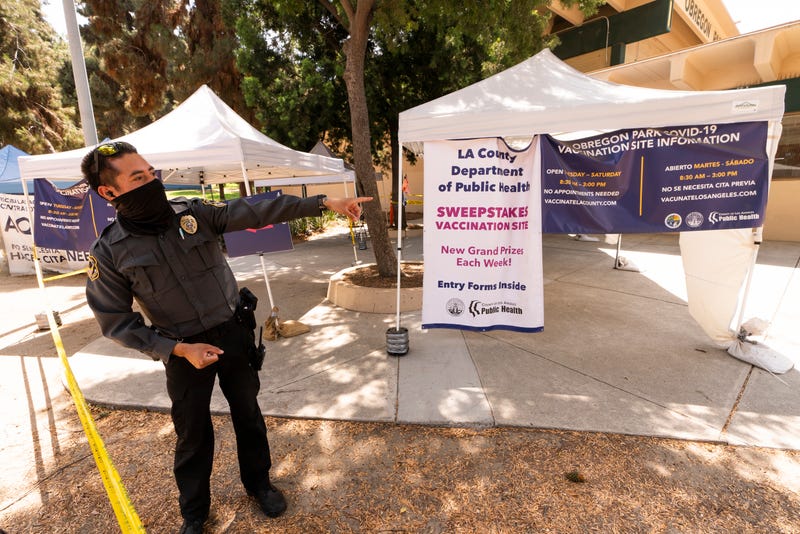 A private security guard gives directions to people looking to get vaccinated, as banners advertise the availability of the Johnson & Johnson and Pfizer COVID-19 vaccines at a county-run vaccination site offering free walk-in with no appointment needed at the Eugene A. Obregon Park in Los Angeles Thursday, July 22, 2021. The top health official in Los Angeles County on Thursday implored residents to get vaccinated as the region experiences a coronavirus surge similar to last summer's. (AP Photo/Damian Dovarganes)
By KNX 1070 Newsradio

California state employees, as well as health care workers throughout the state, will soon be required to show proof COVID-19 vaccinations or submit to weekly testing, officials announced Monday.

The new policy is scheduled to take effect in August and according to the Los Angeles Times, takes away the previous policy where 246,382 state workers did not have to verify their status. Estimates were unavailable on the size of the health care workforce in California.

“As the state’s largest employer, we are leading by example and requiring all state and health care workers to show proof of vaccination or be tested regularly, and we are encouraging local governments and businesses to do the same,” Gov. Gavin Newsom said in a statement.

NEW: CA will have the strongest state vaccine verification system in the US and will require state employees & healthcare workers to provide proof of vaccination—or get tested regularly.

We’re experiencing a pandemic of the unvaccinated. Everyone that can get vaccinated—should.

The California Department of Public Health reported that more than 21 million Californians (62.1%) are fully vaccinated and 3.1 million residents (9.3%) are partially vaccinated.

Almost 75% of Californians who are eligible to receive the COVID-19 vaccine have received at least one dose, but new positive cases are on the rise.

Newsom allowed California to reopen June 15. He has resisted calls to issue mandates on mask-wearing or social distancing, though some counties — including Los Angeles County — have re-instituted their own mandates.

More than 50 organizations of medical professionals on Monday called for stronger measures. The groups, which represents millions health care workers across the nation, called for all health care employers to require their employees to be vaccinated.

Los Angeles County Public Health Director Barbara Ferrer told KNX In Depth on Friday that she was not inclined to implement a vaccine mandate until after the Food and Drug Administration fully approves at least one vaccine.

“We have a long history in this country of mandating vaccines, particularly for children and at other times during pandemics or epidemics where we’ve had a lot of serious disease that’s been circulating,” she said. “I agree that requiring vaccinations among some people is a place that we are all going to end up being once the FDA gives full approval.”