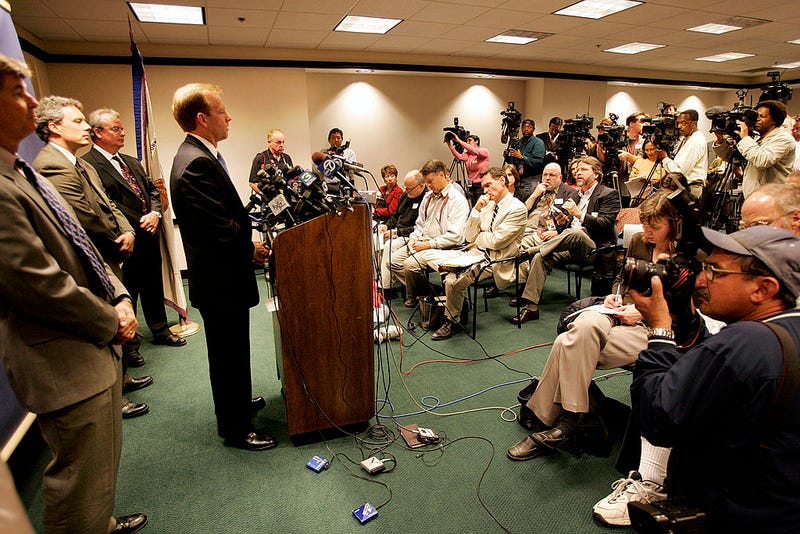 Then- U.S. Attorney McGregor Scott speaks during a press conference on June 8, 2005 in Sacramento, California. Scott was appointed as special fraud council by the EDD. (Photo by David Paul Morris/Getty Images)
By KNX 1070 Newsradio

Scott will serve as Fraud Special Counsel and will work with law enforcement in his new role, according to a release from the Employment Development Department.

California is taking another major step toward empowering prosecutors to crack down on criminals who have defrauded the unemployment program.

For more on this latest news release, visit: https://t.co/LIqIilyBMP#PressRelease #EDDNews

California was overwhelmed by unemployment claims during the pandemic with more than 23 million claims filed amounting to $158 billion in benefits. At least $11 billion of that money was fraudulent and another $20 billion is suspicious.

Despite huge payouts, the department said the state's backlogged claims were more than 222,000 in June.

In his previous role as US Attorney for the Eastern District of the state, Scott and others learned that California approved hundreds of millions of dollars in unemployment benefits in the names of prison inmates, including some on death row.

In 2020, the department that handles unemployment initiated new systems and standards to reduce fraudulent claims, including no longer backdating pandemic claims and launching a new identity verification system, saving an estimated $60 billion in payouts to fraudulent claims.

“California took broad action last year to identify and stop criminal unemployment fraud from continuing—and with McGregor Scott’s aid we are taking another major step toward empowering prosecutors to crack down on those who engaged in this criminal activity,” Saenz said in a statement.