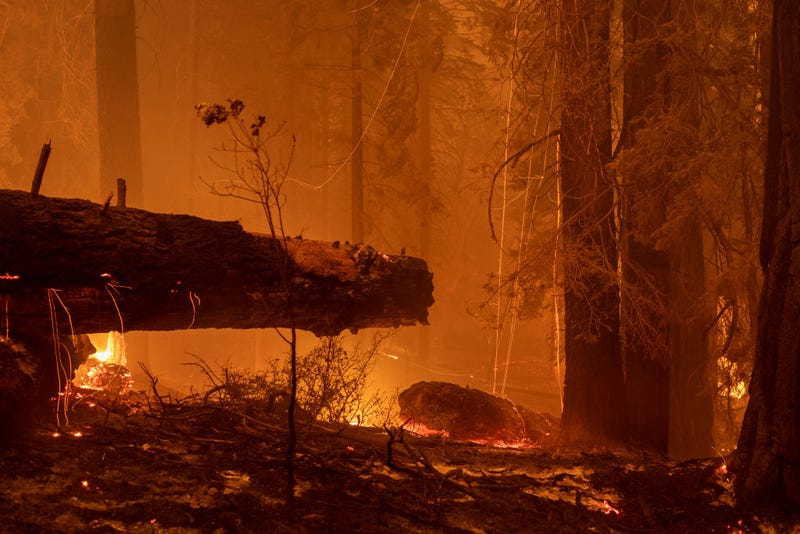 The Windy Fire blazes through the Long Meadow Grove of giant sequoia trees near The Trail of 100 Giants overnight in Sequoia National Forest on Sept. 21, 2021, near California Hot Springs, California. As climate change and years of drought push wildfires to become bigger and hotter, many of the world's biggest and oldest trees, the ancient sequoias, have been killed. The giant trees are among the world's biggest and live to more than 3,000 years, surviving hundreds of wildfires throughout their lifespans. The heat of normal wildfire of the past helped the trees reproduce but increasing fire intensity can now kill them. A single wildfire, the Castle fire, destroyed as much as 14 percent of all the world's giant sequoias in 2020. Photo credit David McNew/Getty Images
By Clare Busch, KNX 1070 Newsradio

Gov. Gavin Newsom traveled to the KNP Complex in Sequoia National Park Thursday to sign a $15 billion package focused on tackling climate change, its effects on the state and wildfires.

Standing in front of sequoias wrapped in flame-retardant tinfoil to protect the ancient trees from wildfires currently ripping through the area, Newsom stressed the necessity of taking action on wildfire management throughout the state.

By early September 2021, Califonia wildfires had already burned about 2 million acres, Cal Fire Chief Thom Porter said at a press conference. The figure was on par with the amount burned in 2020’s record-breaking year. Nearly 10,000 fires burned over 4.2 million acres last year, according to Cal Fire.

Additionally, much of the state is experiencing drought conditions with reservoirs almost at historic lows, according to Newsom.

“We’re deploying a comprehensive approach to meet the sobering challenges of the extreme weather patterns that imperil our way of life and the Golden State as we know it, including the largest investment in state history to bolster wildfire resilience, funding to tackle the drought emergency while building long-term water resilience, and strategic investments across the spectrum to protect communities from extreme heat, sea level rise and other climate risks that endanger the most vulnerable among us,” said Newsom.

Despite progress on Caldor and Dixie, Newsom highlighted the dire situation of the KNP complex fire burning at 33,000 acres and zero percent contained.
Larger, harder to contain wildfires appear to be the new norm. Six out of the 7 largest wildfires in the state’s history have happened since 2020.

The bills include $1.5 billion for wildfire resilience, $5.2 billion for drought resilience and $3.9 billion for investment in electric vehicles, the state’s number one export, according to the governor.

While Newsom celebrated the state’s historic investment, he struck a different tone when talking about Washington, D.C. The federal government actually has jurisdiction over 57 percent of California's 33 million acres of forest, and Newsom is not alone in thinking the federal government has work to do in California.

The Biden administration has made an agreement to increase its oversight on forests in the state, but the money to do so requires the support of Congress.
Newsom called out Mitch McConnell and Washington lawmakers, telling them to “get the damn job done.”

Newsom emphasized that change is needed now, saying the climate crisis and wildfires in California mean that inaction could lead to communities "being wiped off the map.”