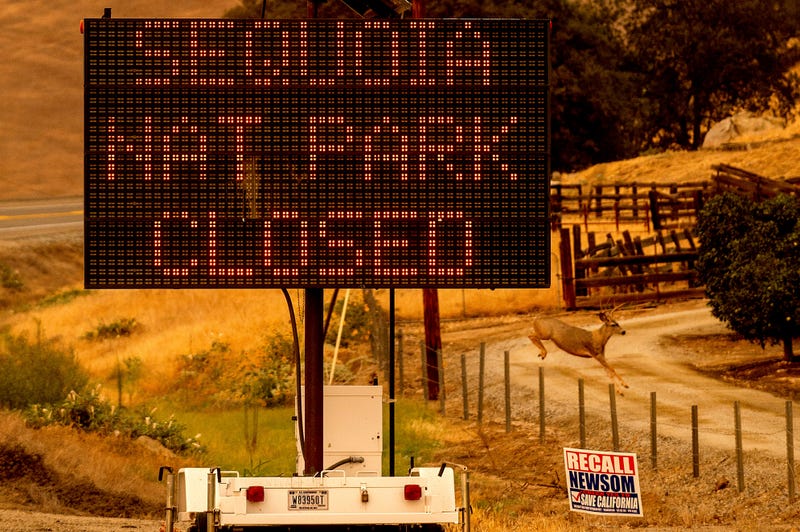 A sign announces the closure of Sequoia National Park, where the KNP Complex Fires are burning, Tuesday, Sept. 14, 2021, in Tulare County, Calif. Individually named the Colony and Paradise Fires, the blazes are burning near the Giant Forest, home to more than 2,000 giant sequoias. Photo credit Noah Berger/AP Photo
By The Associated Press and KNX 1070 Newsradio

SEQUOIA NATIONAL PARK, Calif. — More firefighting resources are being brought in to battle a wildfire complex that has shut down California's Sequoia National Park and threatens its ancient trees.

The KNP Complex, consisting of the Colony and Paradise fires, began with lightning strikes last week in California's rugged Sierra Nevada. Together they have consumed 8,940 acres.

Ground crew access to the Colony Fire (1,683 acres) was limited and the extreme steepness of the Paradise Fire (7,257 acres) terrain prevented any ground access, requiring extensive aerial water and retardant drops on both fires. To view a map of the fires, click here.

The fires are among the latest in a long summer of blazes that have scorched more than 3,500 square miles in the state, destroying hundreds of homes.

Sequoia National Park is closed and headquarters and resident employees are all under mandatory evacuation orders, along with a portion of the community of Three Rivers. Kings Canyon National Park remains open.

Evacuation WARNING has been expanded to encompass the rest of Three Rivers, from Edison Drive east to Mineral King Road. View an interactive map detailing the evacuation warning and order areas here: https://t.co/gcoWOqjyGj

The park’s historic wooden entrance sign dating to 1935 was covered in fire-resistant wrapping, and hoses were in place at the headquarters area for structure protection. 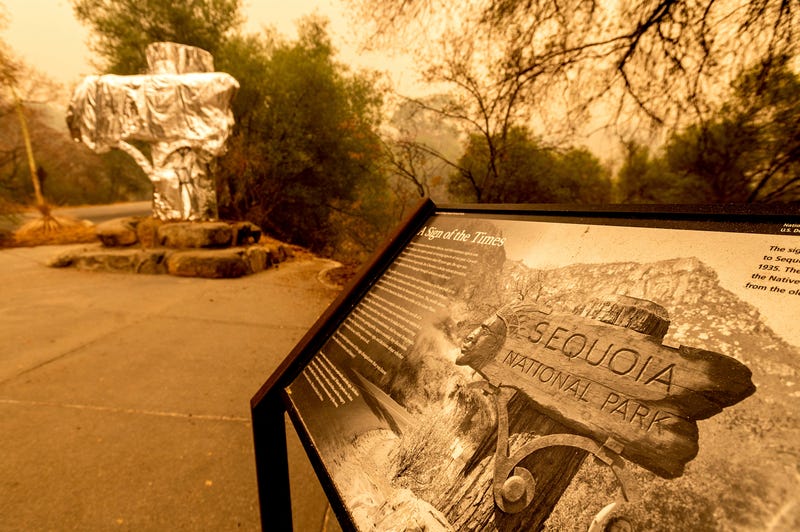 More than 350 firefighters are on the lines, aided by helicopters and air tanker planes when smoke conditions allowed them to fly.

A 50-year history of using prescribed burns — fires set on purpose to remove other types of trees and vegetation — in the park’s sequoia groves is expected to help the giant trees survive by lessening the impact if flames reach them, according to Mark Ruggiero, fire information officer for the Sequoia and Kings Canyon national parks.

Giant sequoias, some thousands of years old, grow on the western flank of the Sierra. They are adapted to fire, which can help them to thrive by releasing seeds from their cones and creating clearings that allow young sequoias to grow.

But Ruggiero noted that the extraordinary intensity of fires in current climate conditions can overwhelm sequoias, a scenario that happened when the 2020 Castle Fire killed many trees in the region.