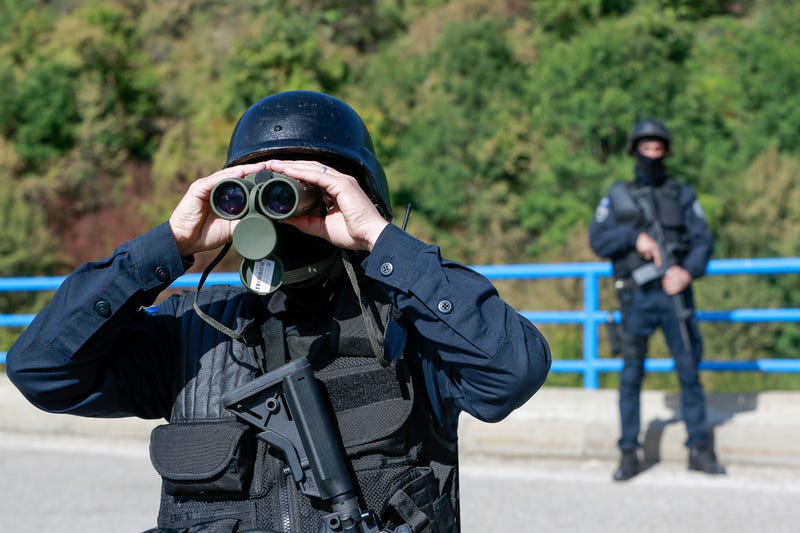 PRISTINA, Kosovo (AP) — A public building in Kosovo was set on fire and another was hit by grenades that did not explode in what government officials described Saturday as criminal acts related to ethnic Serbs protesting a symbolic move on license plates.

Serbian media quoted the head of the Zubin Potok fire department, Sasa Bozovic, as saying a fire that broke out overnight at the town's municipal building engulfed two offices.

The Kosovo Interior Ministry said the blaze burned down a vehicle registration office. It was done “by suspects in a criminal act with terrorist elements,” Interior Minister Xhelal Svecla wrote on Facebook.

Ethnic Kosovo Serbs have blocked the Kosovo-Serbia border with trucks since Monday, angry that Kosovo sent in special police to match Serbia in a license plate move that heightens tensions in the Balkans. Kosovo now removes license plates from cars entering the country from Serbia, as Serbia does with Kosovo plates. They both force drivers to buy temporary plates.

Serbia doesn’t recognize its former province of Kosovo as a separate nation and considers their mutual border only as a temporary boundary.

In Zvecan, a town 10 miles away, two hand grenades were thrown into a public office but did not explode, said Prime Minister Albin Kurti, who was convening a meeting Saturday of the country's National Security Council.

Kurti accused Serbia's government of “inciting and supporting” such behavior and “exploiting Kosovo citizens to provoke a serious international conflict.”

Serbia has put its army troops in regions near Kosovo on higher alert. The state RTS television reported Saturday that Serbian military jets flew in the border area twice during the day, prompting cheers from the protesting Serbs.

Serbian President Aleksandar Vucic has described Kosovo’s recent license plate move as a “criminal action,” and he made the withdrawal of all Kosovar special police a condition of European Union-mediated negotiations to resolve the dispute.

But after the grenades and the fire, Kosovo's government did not sound ready Saturday to pull the special police back.

“These criminal acts best show what would have occurred with the border crossings in Jarinje and Brnjak unless special forces were sent there to guarantee public order and security,” Svecla wrote.

The European Union and the United States have urged Kosovo and Serbia to immediately exercise restraint and refrain from unilateral actions.

Kosovo President Vjosa Osmani called on the world “not to ignore what is clearly (being) seen — a Russian-Serbian tendency to damage the European Union and NATO" by increasing tensions in the Balkans.

“It is time that the international community, and first of all the EU and NATO member countries, see such a danger and prevent the Vucic regime from realizing its goal of creating the ‘Serb world,'&#x201