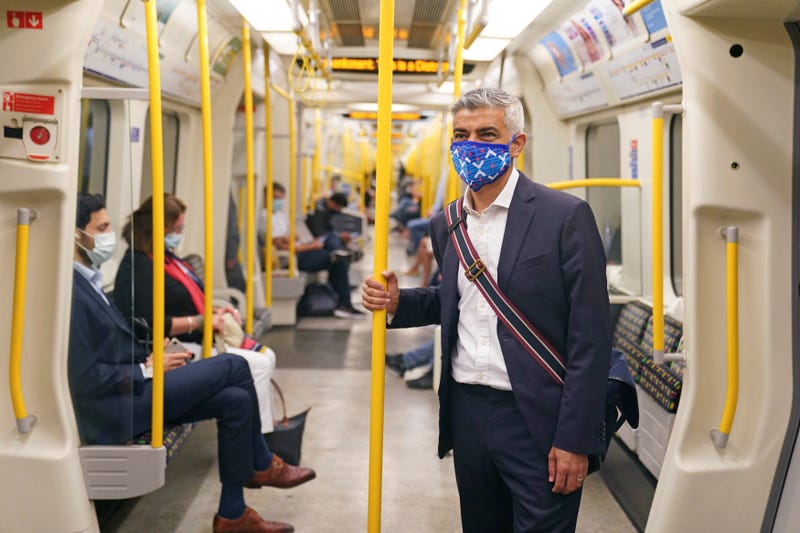 LONDON (AP) — Mask-wearing will be required on London's transport network even after the legal obligation to wear them in England is lifted on July 19, the city's mayor said Wednesday, as coronavirus cases across the whole of the U.K. rose above the 40,000 mark for the first time in nearly six months.

Government figures showed another 42,302 infections across the U.K., the highest daily figure since Jan. 15 when the country was in the midst of a strict lockdown following a lethal second wave of the pandemic. Cases are expected to spike even higher, with the government warning that 100,000 daily infections may be possible this summer, a level not previously seen.

The sharp pick-up in cases in recent weeks as a result of the rapid spread of the more contagious delta variant has prompted concerns about the coming easing of restrictions in England, which will remove legal limits on social contact as well as on mask-wearing.

London Mayor Sadiq Khan said he is “not prepared” to put transport users “at risk” and asked the body that oversees transport in the capital to enforce the use of mask-wearing on the subway, buses and trams as a “condition of carriage” — basically contracts between passengers and Transport for London.

Under the new approach outlined by Khan, enforcement officers would be able to deny access or eject passengers not wearing a mask while using the subway, buses and trams. London's Metropolitan Police and British Transport Police won't be able to get involved, though, as mask-wearing will no longer be required by law.