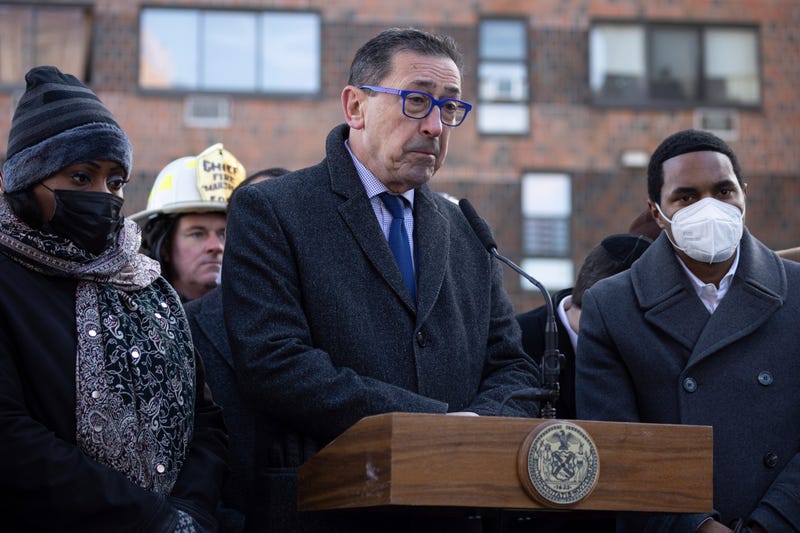 NEW YORK (AP) — New York City’s fire commissioner said Friday that he will retire next month after more than seven years in the job and a career that spanned more than five decades and included stints in every rank in the department.

Daniel Nigro led the nation’s largest municipal fire department through the worst of the COVID-19 pandemic and recently oversaw its response to the city’s deadliest fire in three decades.

With the FDNY’s ranks decimated by the deaths of 343 firefighters and fire officials in the Sept. 11, 2001, terrorist attacks, Nigro received a battlefield promotion to chief of department. He led rescue and recovery operations at ground zero and helped the department rebuild.

Nigro, one of the few holdovers from former Mayor Bill de Blasio’s administration, will leave Feb. 16.

Mayor Eric Adams, who took office Jan. 1 and was with Nigro at the scene of a Bronx apartment blaze that killed 17 people on Jan. 9, called the retiring commissioner a “tireless champion for New Yorkers, and a friend who I’ve leaned on time and again.”

“From overseeing the heroic 9/11 rescue and recovery efforts to leading the FDNY’s unwavering response during the pandemic, Dan has worked tirelessly to protect all New Yorkers,” Adams said in a statement.

“New Yorkers, whether they know it or not, are all safer because of the work he’s done and owe him their thanks. Dan defines public service and will be deeply missed by me and the entire department.”

Nigro is one of six people to hold every rank in the department. His father, also named Daniel, worked for the fire department for 33 years.

“Since the day I raised my right hand 53 years ago and followed my father into the greatest fire department in the world, I have been blessed, privileged, and truly honored to serve the people of our great city,” Nigro said.

As commissioner, Nigro continued a 16-year streak of fewer than 100 fire deaths in the city per year, expanding fire safety education efforts, installing alarms, and turning tragedies, like the Bronx blaze, into teachable moments so they don’t happen again.

Nigro also sought to diversify the department and end pervasive racism in its ranks.

Last October, he suspended nine firefighters without pay in connection with a string of racist messages and memes they shared on their phones, including ones that mocked the Minneapolis police killing of George Floyd.

The fire department called the suspensions the most severe punishments ever handed down in the history of the Fire Department of the City of New York, but some Black firefighters said they didn’t go far enough.

At the same time, the department said it has welcomed historically diverse classes into its academy and now has more women and firefighters of color than ever before.

Nigro’s biggest challenge as commissioner was leading the fire department through the chaotic, early days of the pandemic — the busiest stretch in the history of the city’s EMS operation. For a time, FDNY ambulances were responding to about 6,000 calls a day — more than 50% more than average and far exceeding the demand on 9/11.