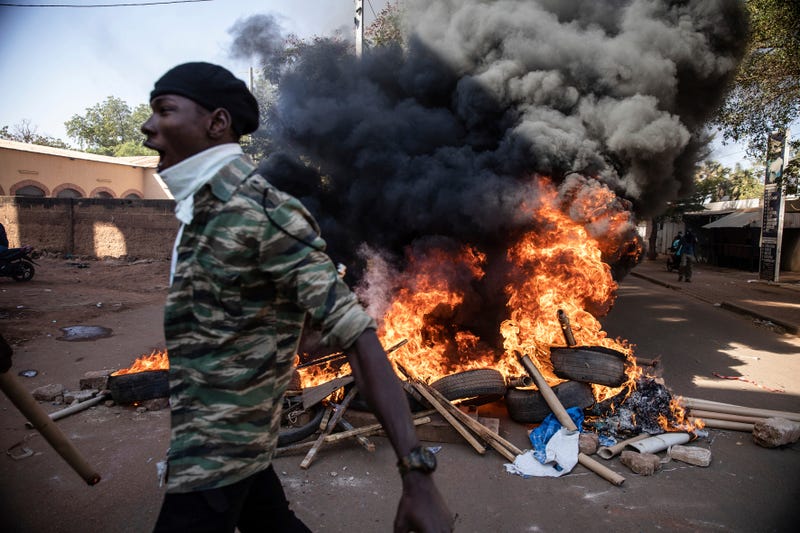 OUAGADOUGOU, Burkina Faso (AP) — Security forces fired tear gas at protesters throwing rocks in Burkina Faso’s capital on Saturday, as tensions rose across the conflict-riddled nation with the population angry at the government’s inability to stem violence linked to al-Qaida and the Islamic State group.

Several hundred protestors took to the streets, calling for President Roch Marc Christian Kabore to resign. The army and police drove through downtown Ouagadougou, the capital, during clashes with protesters, who barricaded streets, set fire to tires and threw rocks and bricks.

“We refuse to lose Burkina Faso. We will put in someone who is competent to assure the security of the nation,” said Isaac Pagberam. “We’ve already lost two-thirds of our territory, nobody can travel the country in peace. We say no! We can’t sit until the jihadis come to Ouagadougou to kill us.”

The unrest against the government also comes in the wake of anti-French protests last week, where at least four people were injured when French forces fired warning shots at protestors in Kaya who stopped its military convoy coming from Ivory Coast that was trying to pass into Niger. While Saturday’s protest was mostly against the government, anti-French protestors threw rocks at foreigners as well.

The government’s crackdown on the protesters follows a week of a mobile internet shutdown, which the government said was for national security reasons. The president vowed to increase aid to the military and investigate the deaths in the Sahel while calling on the population to maintain calm.

“The Burkinabe people have the right and the duty to express themselves freely on the conduct of public affairs,” said Kabore. “I would like to invite everyone to be sensible and not to believe that breaking the thermometer will cure the fever.”

But anger across the country is mounting with more protests planned in the coming weeks. Earlier this month, the opposition gave the president a one-month ultimatum to stem the violence or said it would begin protests demanding his resignation.

The international community is calling for a return to peaceful social and political life, according to a statement from the European Union. However, diplomats say it’s clear that the ruling political elite is losing support and so is the West, which stands with the government, according to a Western diplomat who wasn't authorized to speak to the media so spoke of condition of anonymity.