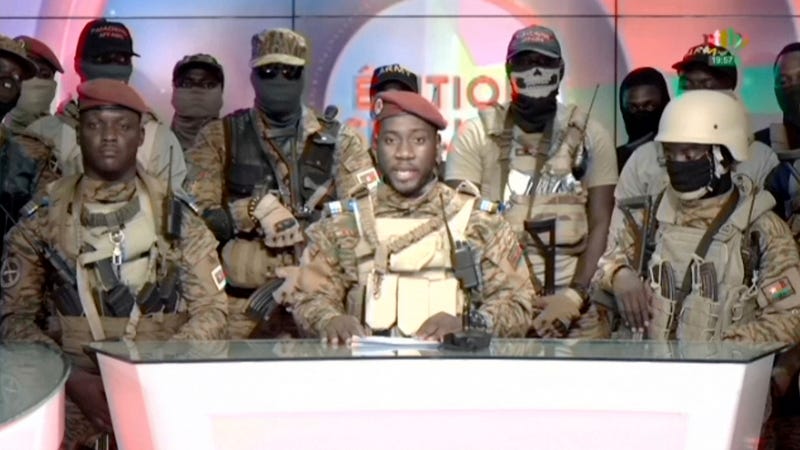 A group of soldiers appearing on state television late Friday had announced that Lt. Col. Paul Henri Sandaogo Damiba had been overthrown less than nine months after he’d mounted a coup himself in Burkina Faso.

“I call on Captain Traoré and company to come to their senses to avoid a fratricidal war that Burkina Faso does not need,” said the statement attributed to Damiba, who unlike other ousted West African leaders has yet to tender a resignation.

Earlier Saturday, comments by a junta spokesman had set into motion an outburst of anger in Ouagadougou, the capital.

“Damiba has tried to retreat to the Kamboinsin French military base to prepare a counteroffensive in order to sow divide amongst our defense and security forces,” said Lt. Jean Baptiste Kabre, reading a statement on behalf of the new junta leadership.

Video on social media showed residents with lit torches outside the perimeter of the French embassy and other images showed part of the compound ablaze.

France has denied any role in the events unfolding in its former colony, and warned its citizens to stay at home amid a “confusing” situation in Ouagadougou.

“We condemn in the strongest terms the violence against our diplomatic presence in Burkina Faso,” the French Foreign Ministry said in a statement late Saturday. “Any attack on our diplomatic facilities is unacceptable.”

In an earlier statement Saturday, the ministry said that "the camp where the French forces are based has never hosted Paul Henri Sandaogo Damiba nor has our embassy.”

Traore, the 34-year-old army captain who was named in charge after the Friday evening coup was announced on state television, said in interviews Saturday that he and his men did not seek to harm Damiba.

“If we wanted, we would take him within five minutes of fighting and maybe he would be dead, the president. But we don’t want this catastrophe,” Traore told the Voice of America. “We don’t want to harm him, because we don’t have any personal problem with him. We’re fighting for Burkina Faso.”

He later told Radio Omega: “We have no intention to bring Damiba to justice. We only wish that he would go rest because he is tired, and as for us we are going to continue to do the work.”

As uncertainty prevailed, the international community widely condemned the ouster of Damiba, who himself overthrew the country’s democratically elected president in January.

“We call on those responsible to de-escalate the situation, prevent harm to citizens and soldiers, and return to a constitutional order,” he said.

“ECOWAS finds this new power grab inappropriate at a time when progress has been made,” the bloc said, citing Damiba's recent agreement to return to constitutional order by July 2024.

After taking power in January, Damiba promised to end the Islamic extremist violence that has forced 2 million people to flee their homes in Burkina Faso. But the group of officers led by Traore said Friday that Damiba had failed and was being removed.

The new junta leadership said it would commit “all fighting forces to refocus on the security issue and the restoration of the integrity of our territory.”

But it remains to be seen whether the junta can turn around the crisis. Concerns already were mounting Saturday that the latest political volatility would further distract the military and allow the jihadis to strengthen their grip on the once-peaceful country.

Still, some in Burkina Faso's military, Damiba was seen as too cozy with former colonizer France, which maintains a military presence in Africa's Sahel region to help countries fight Islamic extremists. Some who support the new coup leader, Traore, have called on Burkina Faso's government to seek Russian support instead.

“One point of contention that has divided the MPSR (junta), the army and indeed the population for months is the choice of international partners," said Constantin Gouvy, Burkina Faso researcher at Clingendael, the Netherlands Institute of International Relations.

“Damiba was leaning toward France, but we might see the MPSR more actively exploring alternative from now on, with Turkey or Russia for example," Gouvy added.

In neighboring Mali, the coup leader has invited Russian mercenaries from the Wagner Group to help with security, a move than has drawn global condemnation and accusations of human rights abuses.

Mali also saw a second coup nine months after the August 2020 overthrow of its president, when the junta’s leader sidelined his civilian transition counterparts and put himself alone in charge.

Chrysogone Zougmore, president of the Burkina Faso Movement for Human Rights, called the latest overthrow “very regrettable,” saying the political instability would not help in the fight against Islamic extremist violence.

“How can we hope to unite people and the army if the latter is characterized by such serious divisions?” Zougmore said.