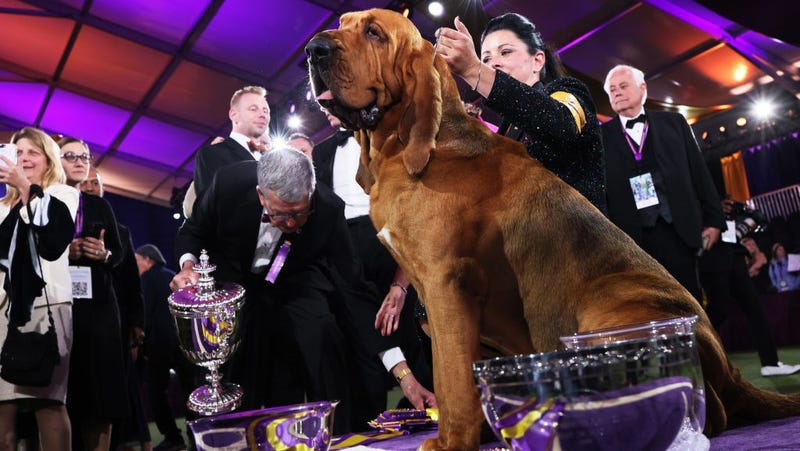 For the first time in the 146-year history of the Westminster Kennel Club Dog Show, a bloodhound won Best in Show.

Trumpet, a four-year-old bloodhound, became the first of his breed to win the illustrious award on Wednesday night.

According to the Westminster Kennel Club, Trumpet is owned by Chris and Bryan Flessner, Heather Buehner, and Tina Kocar.

"I was shocked," Buehner said after the victory, according to the Associated Press.

There were nine other bloodhounds in the event, and almost 3,500 dogs across 200 different breeds overall, according to the WKC.

It was an unlikely victory for Trumpet, who defeated Winston the French Bulldog and five other dogs in the finals, as Buehner added that "sometimes I feel the bloodhound is a bit of an underdog."

Watch Trumpet soak in the moment after winning Best in Show at the 146th #WestminsterDogShow presented by @ProPlan! 🎺 pic.twitter.com/haPFu6soVn

The American Kennel Club describes the large dog, which can grow to 23-27 inches at the shoulders and as big as 110 pounds, as one of "the canine kingdom's most docile citizens."

Although, bloodhounds are "relentless and stubborn on a scent," and because of that, they are known to be able to find lost of hidden people better than nearly any other animal. They are traditionally bred for hunting deer and other animals.

"Their most famous features are a long, wrinkled face with loose skin; huge, drooping ears; and warm, deep-set eyes that complete an expression of solemn dignity," according to the AKC. "Coat colors can be black and tan, liver and tan, or red."

Bloodhounds can be affectionate and enjoy interacting with other dogs and kids, but owners are advised to be "firm but kind" when training them. They are also "notorious for eating anything and everything." Luckily, grooming is not a major issue for the breed, as they only shed once or twice a year.

"Weekly brushing with a medium-bristle brush, a rubber grooming mitt or tool, or a hound glove will remove the dead hair before it can fall onto the furniture," the AKC said. "Brushing also promotes new hair growth and distributes skin oils throughout the coat to keep it healthy."

Many assume that bloodhounds are lazy dogs, but in fact, they are very active and love long daily walks. It's advised to keep your bloodhound on a leash when out for a walk, and they should only play in fenced in backyards because it's possible their hunting instincts will take over and they could escape.

Bloodhounds are also known for their constant drooling, but that's something many owners get used to since the breed has a life expectancy of 10-12 years.

There have been a handful of well-known bloodhounds throughout history and in pop culture, as French Emperor Napoleon III bought a bloodhound for his son around 1860, "Duke" was the name of the Clampett family dog in the 1960s sitcom The Beverly Hillbillies, and McGruff the Crime Dog is the mascot of the US National Crime Prevention Council.