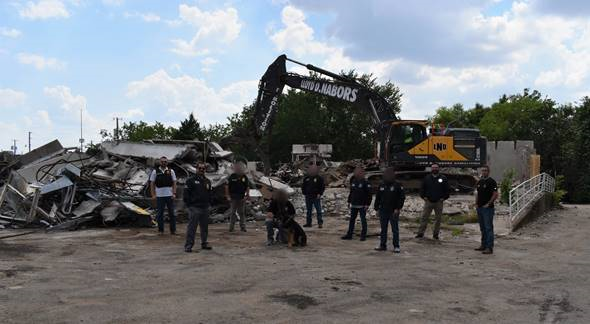 DALLAS (KRLD) - A hotel in northwest Dallas that federal prosecutors say was a haven for drug dealers is being demolished. The Han Gil Hotel Town on Dennis Road has been closed since March of 2019 when federal prosecutors obtained a restraining order against the hotel.

Prosecutors say the property was used by drug dealers to sell meth, crack cocaine, and heroin. They linked three overdose deaths to the property. They also alleged in a civil case that the owner of the hotel knowingly allowed drug dealers to operate, essentially making the property a "safe haven" for illegal activity.

The former owner of the hotel plead guilty to "maintaining drug-involved premises" last year and was sentenced to 20 years in prison. A total of 17 people have entered guilty pleas in the case, including several convicted of drug trafficking charges.

The federal government seized the property and sold it to a developer with the condition that the hotel be destroyed. Demolition crews began work today. The developer plans to build a mixture of apartments and shops on the site.

"For far too long, the Han Gil played host to a parade of despicable criminals engaged in drug dealing, murder, and human trafficking," said U.S. Attorney Nealy Cox. "With the destruction of the building, we have closed a chapter of the Han Gil horror story - but rest assured, our work taking down the many drug dealers that once frequented the facility is far from over."