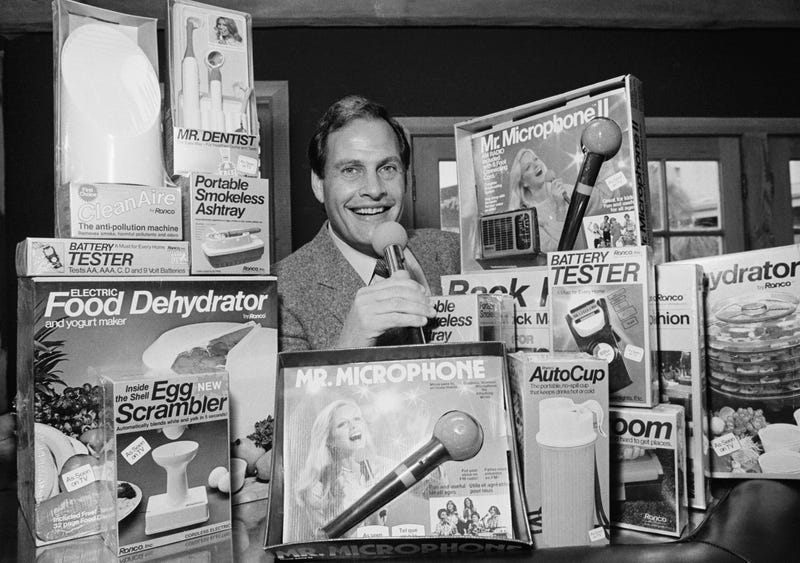 LOS ANGELES (AP) — Ron Popeil, the quintessential TV pitchman and inventor known to generations of viewers for hawking products including the Veg-O-Matic, the Pocket Fisherman, Mr. Microphone and the Showtime Rotisserie and BBQ, has died, his family said.

Popeil died “suddenly and peacefully” Wednesday at Cedars Sinai Medical Center in Los Angeles, his family said in a statement. He was 86. No cause of death was given.

Popeil essentially invented the popular image of the American television pitchman, whose novel products solved frustrating problems viewers didn't know they had. He popularized much of the vernacular of late-night TV ads and infomercials, with lines like “Now how much would you pay?” and “Set it and forget it."

Popeil, whose father was also an inventor-salesman, built his ability to sell things as a young man in the open-air markets of Chicago, where he moved as a teen in the 1940s after spending his earliest years in New York and Miami.

Building on an invention of his father’s, the Chop-o-Matic, he marketed the slicing-and-chopping machine he called the Veg-O-Matic, sold by the company he founded and named after himself — Ronco.

He would take the product-slinging style previously done at state fairs and Woolworth stores to television starting in the late 1950s, offering viewers a chance to skip stores and buy straight from the source with a simple phone call.

As his influence grew, he crafted an enthusiastic, guy-next-door presence that suffused the 1970s with commercials for such gadgets as the the Popeil Pocket Fisherman, a self-contained fishing apparatus, and Mr. Microphone, a then-groundbreaking wireless mic that was amplified through the nearest AM radio.

Though Ronco Teleproducts went bankrupt in 1984, Popeil started from the bottom again and built himself and his company back up. By the 1990s, as the infomercial gained footing and cable television’s influence spread, he was doing full-length shows that evangelized about such devices as pasta makers, food dehydrators and “GLH” (Great-Looking Hair), which was commonly called “hair in a can.”

He appealed to consumers in part because he was a classic American showman, equal parts P.T. Barnum and Thomas Edison — an inventor and innovator, yes, but a popularizer as well, a man who saw consumers’ needs and then found accessible ways to entice them into making purchases.

In a 1997 Associated Press interview, he said his drive to invent was more than mercantile; it was a bit obsessive. “I have enough money today,” he said at the time. “But I can’t stop. If there’s a need for these things, I can’t help myself.”

He seemed always to have new products at the ready: the Ronco Electric Food Dehydrator, Popeil’s Pasta & Sausage Maker, the Inside the Eggshell Egg Scrambler, the Bagel Cutter, the Hav-A-Maid Mop, the Speed Tufting Kit, The Whip-O-Matic.

When home shopping networks arose, he found a natural home, and he sold Showtime Rotisseries in droves on QVC.