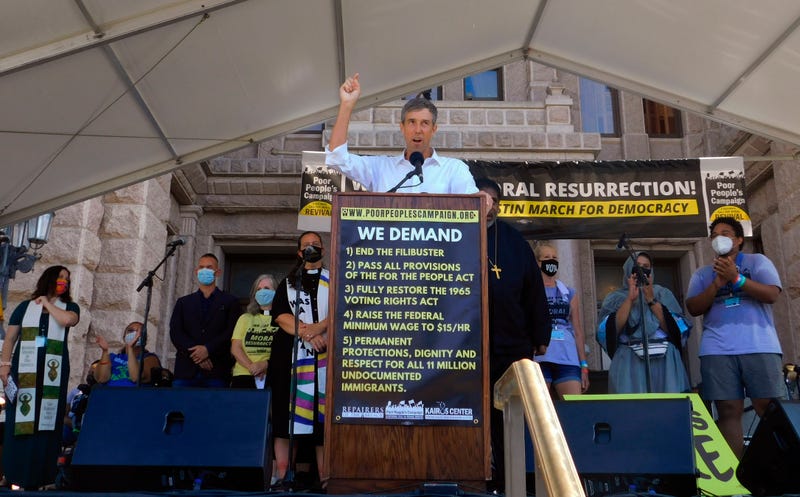 AUSTIN, Texas (AP) — Country music legend Willie Nelson led more than a thousand spectators in singing “vote them out” Saturday from the steps of the Texas Capitol during a rally wrapping up a four-day march in support of Democratic state legislators who bolted for Washington two weeks ago to block GOP-backed voting restrictions.

Families with lawn chairs spread out across the sprawling Capitol greens in Austin. Clergy, politicians, constituents and musicians all spoke out about the proposals to impose voter ID requirements, limit ballot drop boxes and mail voting, and strip local officials of their election authority.

The special session that the exodus by Texas Democrats halted is set to expire next week, but Republican Gov. Greg Abbott has pledged to schedule a new one as soon as the lawmakers return to the state.

“If you don’t like who's in there, vote them out,” Nelson sang, inviting he crowd to join him in singing lyrics he'd previously written about taking a stand at the ballot box.

“I felt like I needed to be here. It is a history-making event that is so necessary right now,” said Brenda Hanson, 75, of Austin. “I am a descendant of slavery and I am not interested in moving back, I want to see this country go forward. I have lived well over three quarters of a century and I have never seen us go backwards like this before.”

Hanson said she is disabled but otherwise would have participated in the nearly 30-mile walk. Instead, she hoped to make a statement with her presence as she sat chanting in support on a bench under a tree.