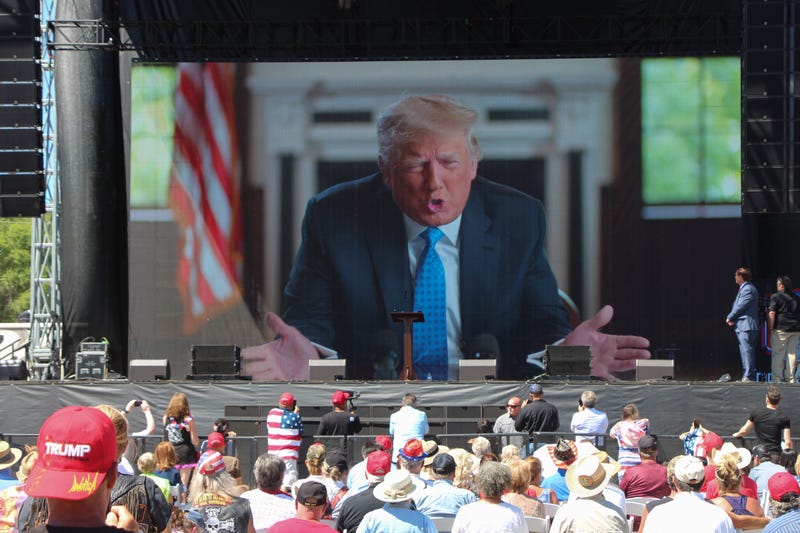 Taken together, the gatherings have gelled into a convention circuit of delusion centered on the false premise that the election was stolen. Lindell and others use the events to deepen their bond with legions of followers who eschew the mainstream press and live within a conservative echo chamber of talk radio and social media. In these forums, “evidence” of fraud is never fact-checked, leaving many followers genuinely convinced that Biden shouldn't be president.

“We know that Biden’s a fraudulent president, and we want to be part of the movement to get him out,” said Donna Plechacek, 61, who traveled from Chippewa Falls, Wisconsin, with her sister for the event. “I know that they cheated the election. I have no doubt about that. The proof is there.”

State election officials, international observers, Trump’s own attorney general and dozens of judges — including many Trump appointed — have found no verifiable evidence of mass election fraud. Indeed, Trump’s Cybersecurity and Infrastructure Security Agency called the election “the most secure in American history” and concluded there was “no evidence that any voting system deleted or lost votes, changed votes, or was in any way compromised.”

But Plechacek is not alone. A recent Quinnipiac University poll found that two-thirds of Republicans, 66%, think Biden’s victory was not legitimate, while CNN found in April that 70% of Republicans do not think Biden won enough votes to be president. Half, 50%, said there is solid evidence to support that claim.

They are people like Deb Tulenchik and Galen Carlson from Pequot Lakes, Minnesota, who recalled the shock they felt after the election as Trump’s early election night lead faded as additional ballots were counted.

Thanks to the country’s polarization, many Trump supporters didn’t know anyone who voted for Biden and only saw Trump-Pence signs lining the roadways as they drove around their neighborhoods. Carlson, 61, said he went to bed believing Trump won. He didn't heed warnings that mail-in votes take longer to count, so early returns would likely skew toward Trump, who urged his supporters to vote in person and not by mail.

“I was asleep early cause it looked like it was going to be a done deal. And then when we woke up I couldn’t believe it,” he said.

Trump spent months girding himself against possible defeat, insisting he could only lose if there was massive fraud. It's a lie he's sure to repeat as he steps up his public schedule in the coming weeks.

But the narrative was already resonating under the beating sun at the Wisconsin MAGA rally, where attendees came decked out in Trump gear, including plenty of shirts declaring, “Trump Won!”

While Lindell repeatedly described the event as a free speech festival — paid for by him — it had all the trappings of a Trump rally, including several of his frequent warm-up acts and a large American flag hoisted up by cranes.

It was a carnival atmosphere: a face-painting tent for kids; stands selling corndogs, fresh-cut fries and ice cream; a flyover of old military planes. The 2020 campaign lived on, with vendors selling old campaign merchandise — along with Lindell’s pillows. One older man with a cane walked around shirtless, wearing a sparkly cowboy hat and Crocs and using a Trump flag as a cape. One young woman carried a helmet with horns — reminiscent of the headgear worn by an Arizona man who calls himself the QAnon Shaman and who took part in the insurrection at the U.S. Capitol on Jan. 6.

Indeed, several people said they were at the U.S. Capitol that day, though they were vague on their roles.

While some were Trump rally devotees, traveling the country to see the former president in person, many said they were attending their first political event. Some said they paid little attention to politics until the election, or began to get involved because they opposed pandemic restrictions.

Again and again, attendees insisted Trump won the election. And several said they sincerely believed that he will be reinstated in the coming months — a belief that has been pushed by Lindell and repeated privately by Trump, even though there is no legal framework under which that could be accomplished.

Some suggested the military would be involved; others are convinced he remains in control today.

Most assailed the mainstream media and said they instead got their news from people like Lindell and former Trump strategist Steve Bannon, as well as the conservative channel Newsmax, talk radio and social media platforms.

Few have gone to greater lengths than Lindell to convince the American public the election was stolen. By his own account, he has spent millions of dollars staging election-related events, hiring private investigators and creating movies that purp