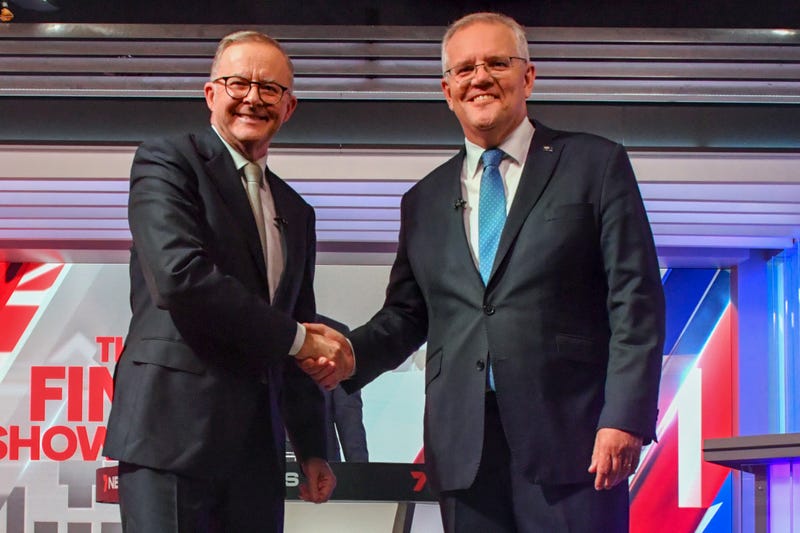 CANBERRA, Australia (AP) — Australians will go to the polls on Saturday following a six-week campaign that has focused on pandemic-fueled inflation, climate change and fears of a Chinese military outpost being established less than 2,000 kilometers (1,200 miles) off Australia’s shore.

He began the campaign in April by urging voters to stick with a government that delivered one of the lowest pandemic death tolls of any advanced economy rather than risk the opposition center-left Labor Party.

An early election late last year had been widely anticipated with Morrison expected to reap the political capital from his government’s success in containing the spread of COVID-19 in the first year of the pandemic.

But his nickname “ScoMo” was changed by critics to “SloMo” a year ago when Australia’s vaccine rollout fell months behind schedule.

Australia has recorded more than double the number of COVID-19 deaths so far this year than it did during the first two years of the pandemic. Around 8,000 people have died with COVID-19 among Australia's population of 26 million. Only 2,239 died in 2020 and 2021. The more transmissible virus variants have tarnished the government’s pandemic record.

Opposition leader Anthony Albanese noted on Friday that he was the first candidate with a “non-Anglo Celtic name” to run for prime minister in the 121 years since the office was created.

Albanese was brought up in Sydney by a single Irish-Australian mother who fell pregnant in 1962 to an Italian during a trip to Europe. She took the father’s name and lied that they had been married before he died in a car accident. Father and son first met in 2009.

Albanese has recounted his own childhood hardships in advocating Labor policies of cheaper child care for low- and middle-income families and better nursing home care for the elderly.

“Part of what I’ve said during this campaign is: no one held back and no one left behind,” Albanese said. “No one left behind because Labor will always look after the vulnerable and the disadvantaged.”

The government changed voting regulations on Friday to enable thousands of people who have recently been infected with COVID-19 to vote by phone.

Some polling booths would be closed on Saturday because many of the 105,000 election workers were sick with the virus or flu. Army reservists have been asked to fill in, an official said.

The pandemic and the war in Ukraine have pushed up costs of living and cast doubt on the conservatives’ boast of being better economic managers than Labor.

After the annual inflation rate soared to 5.1% in the March quarter, the central bank lifted its benchmark interest rate for the first time in more than 11 years from 0.1% to 0.35%.

Two weeks after cash rose by a quarter of a percentage point to 6.75% in November 2007, Prime Minister John Howard’s conservative government was voted out of office, ending more than 11 years in power.

Labor has also taken aim at the government’s foreign policy credentials after China and the Solomon Islands confirmed during the election campaign they had finalized a bilateral security pact. Labor described it as Australia’s worst foreign policy failure in the Pacific since World War II.

Australia already has a security pact with the Solomons and is the impoverished South Pacific island nation’s most generous provider of foreign aid.

Foreign Minister Marise Payne had proposed in November doubling Australian aid to the Pacific to 2.88 billion Australian dollars ($2 billion) a year to counter China’s rising influence, The Australian newspaper reported on Friday, citing unnamed sources. But she was refused by her Cabinet's national security committee colleagues.

Morrison declined to confirm or deny the newspaper report because of the secrecy surrounding the committee’s deliberations.

Morrison rejected the premise of a question when a reporter asked if he would consider doubling Pacific aid to counter Beijing's moves.

“You’re suggesting that if you just double funding in the Pacific then somehow the Chinese government doesn’t have any influence or won’t be successful in seeking to coerce or exert its influence in the southwest Pacific,” he said. “That‘s your assumption and that assumption doesn’t hold.”

Solomons Prime Minister Manasseh Sogavare said that there will be no Chinese naval base in his country and China has denied seeking a military foothold in the islands.

Senior government lawmakers have said the timing of the China-Solomons agreement during an election campaign is evidence that Beijing was attempting to undermine the ruling coalition’s prospects for reelection.

The government maintains that Beijing wants a change of leadership because a Labor administration would be less likely to stand up against Chinese economic coercion.

As well as campaigning against Labor, Morrison’s conservative Liberal Party is fighting off a new challenge from so-called teal independent candidates to key government lawmakers’ reelection in party strongholds.

The teal independents are marketed as a greener shade than the Liberal Party’s traditional blue color and want stronger government action on reducing Australia’s greenhouse gas emissions than either the government or Labor are proposing.

Recent opinion polls have put Labor narrowly ahead of the coalition. But the pollsters’ credibility has yet to recover since their spectacular failure in the 2019 election.

The split of votes between the government and Labor in 2019 was 51.5% to 48.5% — the mirror opposite of the result that Australia’s five most prominent polls predicted.