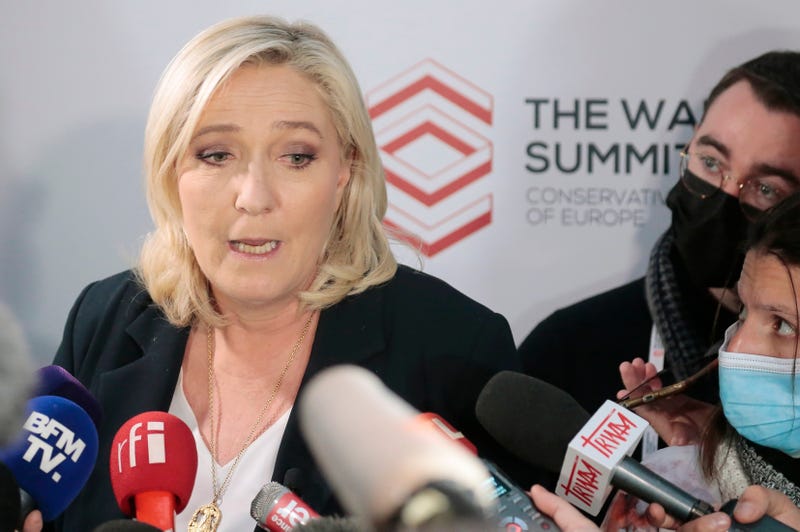 WARSAW, Poland (AP) — European right-wing populist leaders declared Saturday they will cooperate more closely at the European Union's parliament in order to defend the sovereignty of their bloc's 27 member nations.

A statement at the end of the meeting fell short of a declaration to create a new alliance at the European Parliament, an idea that some of the party leaders have sought but that has so far not materialized.

Still, French far-right party leader Marine Le Pen said the meeting was “a key step” toward closer cooperation. It brought together party leaders from more than a dozen nations united in conservative values, nationalism and a sense that the EU is taking powers for itself never given to it in the union’s treaties.

"It’s a step forward that is very welcome and allows me to be very optimistic about the future,” Le Pen said.

The party leaders agreed to meet at least every two months at the European Parliament, while another meeting is planned in Spain in two months “to continue to move forward on strengthening and creating that big European force,” Le Pen said.

The event Saturday follows a joint declaration by 16 right-wing parties in July and an visit by Le Pen to Budapest in October.

The meeting was also a show of solidarity for the Polish and Hungarian governments from like-minded politicians.

The governments of the two central European nations remain locked in a bitter standoff with the European Commission, the EU's executive arm, which is withholding funds to both countries over democratic backsliding. Warsaw and Budapest argue that the commission is taking a step that never was laid out in any EU treaties.

The statement Saturday said the populists need a model of cooperation to “put a stop to the disturbing idea of creating a Europe governed by a self-appointed elite."

“We reject the arbitrary application of union law, bending or even violating the treaties. Only the sovereign institutions of the states have full democratic legitimacy,” it added.

They also lashed out at internal guidelines the Commission had proposed substituting the “Christmas period” with “holiday period.” The EU retracted it after a backlash from conservatives and the Vatican.

Citing that incident, the populists said they objected to attempts "to ideologically alter our languages is a way which will detach a human being from their culture and heritage.”

Wojciech Przybylski, editor in chief of Visegrad Insight, a policy journal focused on Central Europe, said there is a paradox in a “transnational meeting of nationalist parties.” He thinks the event was organized so the party leaders can show their voters “they are not alone.”

Both the Hungarian and Polish ruling parties, he noted, are “in deep trouble," with Orban’s Fidesz party forced to leave the main group of conservatives at the European Parliament and Poland’s governing populists seeing a drop in popularity at home.

“This is essentially a PR stunt," Przybylski said.

The Poles' welcome of Le Pen marks a recent change of heart for Poland’s governing conservatives, who had long refused to cooperate with the French presidential candidate due to her warm relations with Russian President Vladimir Putin. Le Pen's stance has been a taboo in Poland, a country long dominated by Russian and Soviet rule.

“We have as much in common with Ms. Le Pen as with Mr. Putin," Kaczynski remarked in 2017.

As Saturday’s meeting opened in a hotel, a small group of protesters outside blew whistles and yelled accusations that the leaders were extremists serving the interests of the Kremlin. The demonstrators held signs saying “Russian pact,” and chanted, “Warsaw free from fascism!”

Polish party officials on Saturday defended the meeting with Le Pen, arguing that Europe's mainstream leaders have done much more than Le Pen to help the Kremlin, citing the Nord Stream 2 gas pipeline, which has been supported by outgoing German Chancellor Angela Merkel.