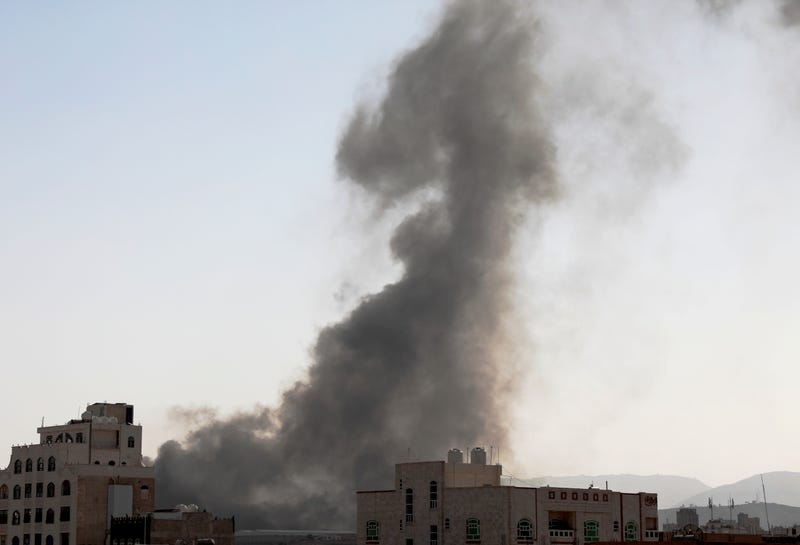 CAIRO (AP) — The Saudi-led coalition fighting Iran-backed rebels in Yemen said Sunday that it had launched a new air campaign on the country’s capital and other provinces, in retaliation for missile and drone attacks on Saudi Arabia.

“The targeting of civilians and civilian facilities is a red line,” Col. Turki al-Maliki, a spokesman for the coalition, was quoted as saying by the official Saudi Press Agency. He was referring to the missile and drone strikes on Saudi cities in recent weeks that the Iranian-backed rebels, known as Houthis, had claimed.

“The terrorist (Houthi) leaders will be held accountable,” he said. Residents in Sanaa, Yemen’s rebel-held capital, reported hearing huge explosions as a round of bombs fell on the city on Sunday.

The Houthi-run al-Masirah satellite TV channel reported at least seven airstrikes on Sanaa's districts of Attan and al-Nahda. Al-Masirah did not say what facilities were hit by the coalition, but back smoke was seen rising over military camps in the areas. The channel also reported an airstrike in the district of Bajil, in the province of Hodeida.

The coalition said the Houthis were encouraged by a decision of President Joe Biden's administration last month to remove them form the U.S.'s terror list. The designation of the Houthis as a terrorist organization was announced in the waning days of former President Donald Trump’s administration, and caused widespread outcry from humanitarian groups working in Yemen.

While the Houthi attacks rarely cause damage or casualties, strikes on major oil facilities in Saudi Arabia, the world’s largest oil exporter, have shaken energy markets and the world economy.

The coalition also said it intercepted and destroyed at least 12 explosives-laden drones the rebels fired on Sunday at Saudi Arabia. On Thursday, the Houthis said they launched a drone attack on an oil facility in the port city of Jiddah. Another ballistic missile attack last week reached as far as the capital, Riyadh, where it was intercepted and exploded in the sky, scattering shrapnel over the city.

the Houthis were emboldened after the new U.S. administration revoked Washington’s designation of the Houthis as a terrorist organization in February.

Yehia Sarie, a Houthi military spokesman, meanwhile, claimed that their air defenses on Sunday downed a Turkish-made drone run by Saudi Arabia’s air force over the norther province of Jawf.

There was no acknowledgement from Saudi Arabia, and the rebels did not provide evidence to support their claim.

Sunday's airstrikes on Sanaa have also come as the Houthis continue their weeks-long offensive on the central province of Marib, in an attempt to retake it from the internationally recognized government. They have faced stiff resistance and suffered heavy casualties without making progress. Hundreds were killed in the Marib clashes.

There have been also clashes in the province of Taiz. The Medecins Sans Frontieres charity, or MSF, said on Friday that over two dozen people wounded in the clashes were treated in al-Thawra hospital, which is run by the charity. MSF also said heavy gunfire hit the hospital, wounding at least three people including one healthcare worker and a 12-year-old child.

MSF also said that on Friday the Al-Thawra hospital in Taiz treated 28 people wounded during intense clashes since Wednesday, adding that the hospital itself was hit by gun fire, injuring three, including a 12-year-old boy.

The conflict in Yemen erupted nearly six years ago, after the Houthis swept into the capital and seized much of the country’s north. A Saudi-led military coalition launched a bombing campaign to dislodge the Houthis and restore the internationally recognized government.

The stalemated war was has killed around 130,000 people, including more than 12,000 civilians, pushed millions to the brink of famine and spawned the world’s worst humanitarian crisis. Saudi Arabia has faced widespread international criticism for its airstrikes that have killed civilians and hit non-military targets in Yemen.