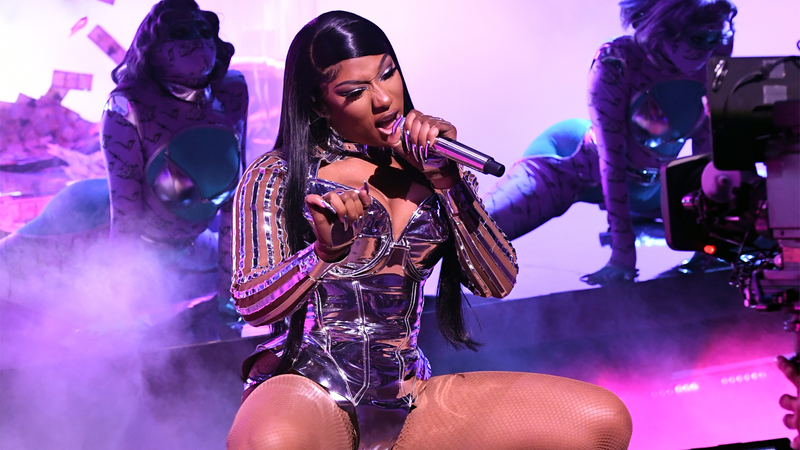 Y’all ain’t ready for this one. After her month long break, Megan Thee Stallion has returned with another Hot Girl Summer banger. Her new single, “Thot S***,” dropped at midnight EST on June 11, with an accompanying visual that features the reemergence of her alter ego Tina Snow.

I’m really just talking shit and taking ownership of the words “thot” and “hoe” bc they’re not the drag the men think it is when trying to come at women for doing them 💁🏽‍♀️ https://t.co/K2fJuVECvC

In the Aube Perrie-directed video, Megan is an unnamed conservative senator’s worst nightmare. Or, a couple of worst nightmares. After the senator trolls the YouTube comments of her “Body” music video and just before he’s about to get better aquatinted with himself (if you know what we mean) - he’s interrupted by a call from the rapper – who warns him not to “f*** with” the women he depends on in every day.

After the Senator's unnecessary and hateful comment, he's met with a number of thot-lucellations (that's thot hallucinations, for those of you who don't know). Meg as Tina proceeds to run the senator over with a garbage truck, as her and a slew hallucinatory thotties continue to cause havoc in his life for the remainder of the vid.

They track him everywhere, from a bathtub, to a diner, to the grocery store and more. In the end, vengeance comes to full fruition on an operating table. Which honestly has much more of an impact if you see it for yourself, so we won’t ruin it by telling you. Check it out for yourself below, oh and if it hasn’t already been made obvious, it’s NSFW. So turn your computer to face the wall or something and grab your headphones, because simply not watching it is not an option.

"Thot S***” is Stallion's first release of 2021, and if what's to come is anything like this record, then we can't wait to see what else is in store.