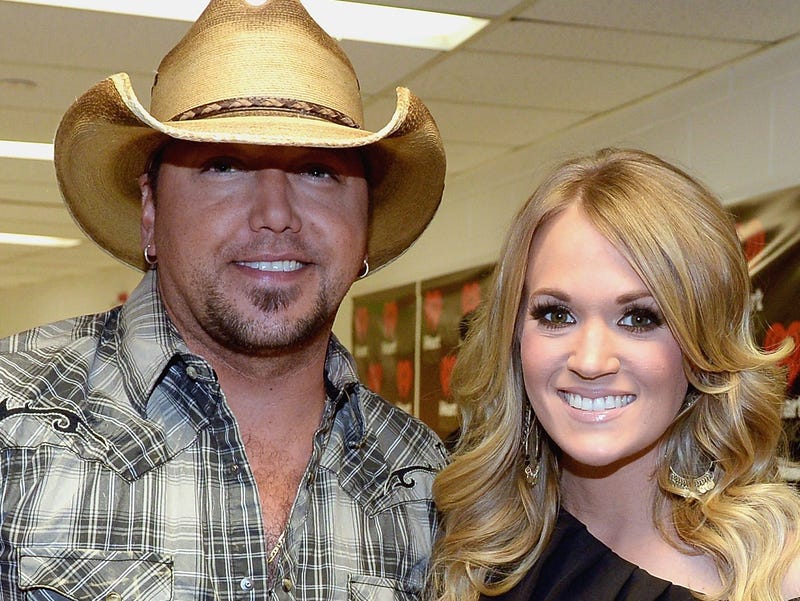 Jason Aldean has recorded duets with Kelly Clarkson and Miranda Lambert, but his most recent collaboration with Carrie Underwood has been years in the making.

“Jason asked if I would sing ‘If I Didn’t Love You’ with him," reveals Carrie in a statement from her label. "I knew I liked the song, and Jason and I have actually been kind of trying to do things together over the years. We’ve sung together before, but we’ve never officially recorded anything together. It just kind of felt like this could be our moment.

"I felt like it was a little bit of an unexpected duet to other people, but I feel like I kinda always knew at some point I’d probably sing with him officially, and this just seemed like, the stars were aligning and it just seemed like it was going to be the perfect fit," she continues.

“We were pretty close to finishing up this album, but this song came in and we knew we had to record it,” Jason shares in a press release. “I went ahead and put my vocals down while we asked Carrie in the meantime. Luckily she loved the song and it was kind of like a rocket from there. She did her thing…and I don’t know how, but she made it sound even better than what we expected. It’s a really special song to start this album.”

So, did Jason and Carrie get to spend any time together in the studio working on this project? “When Jason and I recorded ‘If I Didn’t Love You,’ he had actually done a little bit of the groundwork on his own, just to save some time and then he came to the studio when I was putting in my part and then he kind of went back and added a little bit more onto it,” says Carrie. “So, there was a little bit of recording separately and some recording together, and I feel that’s the best way to do it.

"You have to see what the other person’s bringing, and it’s a little intimidating when you get into the studio with another artist, so for you to have your individual time and your together time I feel like is kind of the best way to do it. But it definitely added to the vibe of everything to have him there when I was recording my stuff. We were able to bounce things off of each other and get feedback in real time, which is really cool.”

"If I Didn't Love You" will be included in Jason's forthcoming album Macon, which drops on November 12th.