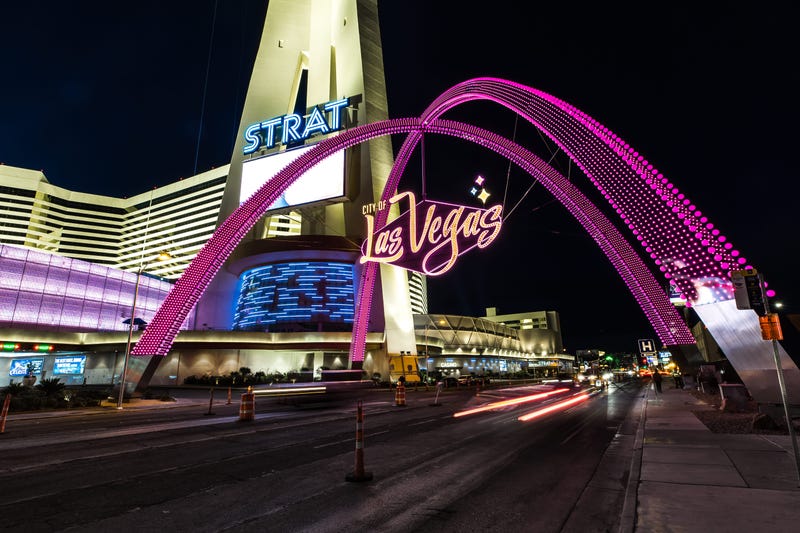 Las Vegas, NV (KXNT) - Wednesday night, the city of Las Vegas illuminated its new, 80-foot-tall Gateway Arches spanning Las Vegas Boulevard between St. Louis and Bob Stupak avenues at the base of The STRAT Hotel, Casino & SkyPod. Conceived and designed by Selbert Perkins Design and fabricated and installed by YESCO (the 100-year-old company synonymous with Las Vegas’ most iconic signs), the archway marks travelers’ official arrival into the city of Las Vegas.

#ClarkCounty today has launched a new reporting tool called “FixIt Clark County.” It allows residents to report issues and request services. The website is https://t.co/PWy2a0WnKu or download the app on your device.https://t.co/9N5COR0FYD#Vegas pic.twitter.com/7u6AjhbV9N

“Las Vegas is known worldwide as the getaway for the best in entertainment, fun, dining and convention business,” Mayor Carolyn G. Goodman said. “What better way to invite everyone into historic downtown than by passing through this massive new archway into the heart of a revitalized Las Vegas?”

The blue illuminated arches form a towering gateway to the city’s burgeoning downtown and feature a pink, retro-inspired Las Vegas emblem suspended above the boulevard.

The DT Gateway Arches set to light up tonight at sundown.

Let there be light! We are excited to see the @CityOfLasVegas' new 80-foot-tall Gateway Arches shine tonight, inviting you into the historic downtown Las Vegas district! #DTLV pic.twitter.com/gF1HEM8QTu

“Ward 3 is a dynamic part of the city of Las Vegas and I am so excited to represent the home of this beautiful new gateway,” Ward 3 Councilwoman Olivia Diaz said. “I am sure these iconic arches will become synonymous with the fun and excitement of our city, as well as being a point of community pride for years to come.”

While the “Welcome to Fabulous Las Vegas” sign at the south end of the Strip enjoys world renown, many people do not realize it lies outside city of Las Vegas’ boundaries in unincorporated Clark County, Nevada. The new, brightly lit, Gateway Arches will welcome visitors to the city of Las Vegas as they travel north on Las Vegas Boulevard.

- The arches are comprised of 13,000+ RGB light-emitting diode (LED) pucks that are individually programmable.

- There are over 700 feet of fully programmable RGBW LED Flex Neon; each pixel is 4.92 inches.

- There are 900+ LED lamps in the southern face of the hanging “Las Vegas” cabinet.

- Four footings were drilled with a drill rig and are 20 feet deep by 4 feet wide, with a steel-reinforced cage.

The Gateway Arches will be illuminated every day, beginning at dusk.