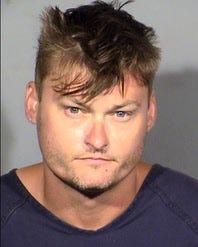 Police say 33-year-old Christopher Martell was arrested shortly after a man and a woman were stabbed near Desert Springs Hospital on Wednesday afternoon.

Through the course of their investigation, police found evidence that tied Martell to the stabbing deaths of a pair of homeless women, both of whom were killed near the UNLV area.

The two who were stabbed near Desert Springs Hospital were said to be in critical condition. Like the previous victims, the pair attacked on Wednesday were also homeless.

Martell faces two counts of open murder and two counts of attempted murder. An initial court appearance on Thursday was postponed, with Martell refusing to attend.