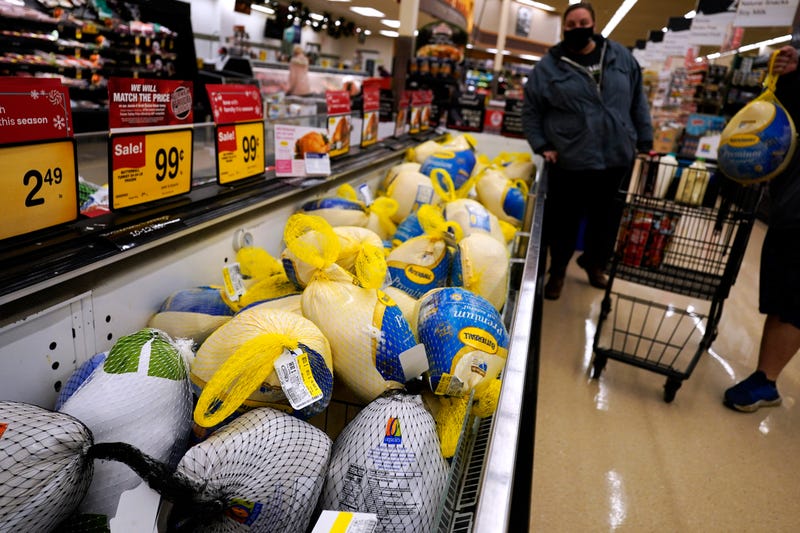 WASHINGTON (AP) — Americans are doing the main thing that drives the U.S. economy — spending — but accelerating inflation is casting a pall.

A raft of economic data issued Wednesday showed the economy on solid footing, with Americans’ incomes rising and jobless claims falling to a level not seen since the Beatles were still together.

The spike in prices for everything from gas to rent, however, will likely be the chief economic indicator Americans discuss over Thanksgiving Day dinner.

The Commerce Department reported that U.S. consumer spending rebounded by 1.3% in October. That was despite inflation that over the past year has accelerated faster than it has at any point in more than three decades.

The jump in consumer spending last month was double the 0.6% gain in September.

At the same time, consumer prices rose 5% compared with the same period last year, the fastest 12-month gain since the same stretch ending in November 1990.

“Although consumer confidence has declined in the fall because of high inflation, households continue to spend,” said Gus Faucher chief economist at PNC Financial.

Personal incomes, which provide the fuel for future spending increases, rose 0.5% in October after having fallen 1% in September, which reflected a drop in government support payments.

Pay for Americans has been on the rise with companies desperate for workers, and government stimulus checks earlier this year further padded their bank accounts. That bodes well for a strong holiday season and major U.S. retailers say they’re ready after some companies, like Walmart and Target, went to extreme lengths to make sure that their shelves are full despite widespread shortages.

Analysts said the solid increase in spending in October, the first month in the new quarter, was encouraging evidence that overall economic growth, which slowed to a modest annual rate of 2.1% in the July-September quarter, will post a sizable rebound in the current quarter. That is expected as long as the recent rise in COVID cases and concerns about inflation don't dampen holiday shopping.

“After experiencing one of the most severe economic shocks of the past century in 2020, the U.S. economy has displayed one of the most rapid recoveries in modern history in 2021,” Gregory Daco, chief U.S. economist for Oxford Economics, wrote in a note to clients. Daco predicts GDP in the current October-December period would rebound to a growth rate of 5.6%.

The number of Americans applying for unemployment benefits, meanwhile, dropped last week by 71,000 to 199,000, the lowest since mid-November 1969. But seasonal adjustments around the Thanksgiving holiday contributed significantly to the bigger-than-expected drop. Unadjusted, claims actually ticked up by more than 18,000 to nearly 259,000.

In a cautionary note Wednesday the University of Michigan reported that its consumer sentiment index fell 4.3 percentage points to a reading of 67.4 this month, its lowest level since November 2011, weighed down by inflation concerns.

And there are regions in the U.S. experiencing a surge in COVID-19 cases that could get worse as families travel the country for the Thanksgiving holiday.