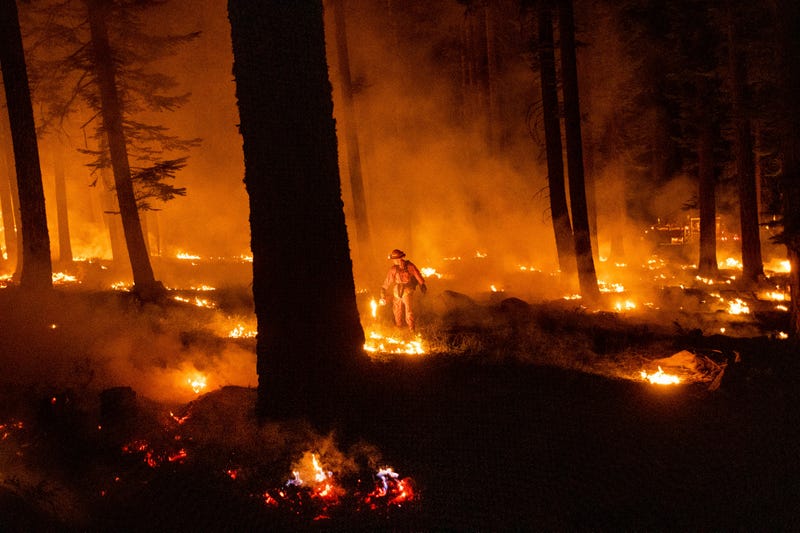 PARADISE, Calif. (AP) — California’s largest wildfire so far this year was flaring up Friday but it was because the flames were chewing through unburned islands of vegetation within a perimeter that firefighters have built, authorities said.

The Dixie Fire covered 376 square miles (974 square kilometers) in the mountains of Northern California where 42 homes and other buildings have been destroyed and more than 10,000 are still threatened.

The vegetation burning inside the fire on Thursday produced a huge “fire cloud," towering columns of smoke and ash that can pose a danger to firefighters. Residents were given assurances that it had been expected and would happen again but did not mean crews were losing control they have on the fire.

“There's nothing close to our line right now. It's all interior fuels burning,” Mike Wink, an incident commander, said in an online briefing.

The fire northeast of the town of Paradise, which was largely destroyed in 2018 by the nation's deadliest wildfire in a century, has been burning since July 13 and is more than 20% contained.

Meanwhile, concerns over the risk of rolling outages in the coming weeks prompted California Gov. Gavin Newsom to sign an emergency proclamation on Friday that offers cash incentives to big energy users such as factories or casinos to conserve when the power supply is tight.

The state could face a shortage of 3,500 megawatts on days when soaring heat drives up demand. That's partly because an intensifying drought has reduced water levels in reservoirs and diminished output from the hydroelectric dams.

A historic drought and recent heat waves tied to climate change have made wildfires harder to fight in the American West. Scientists say climate change has made the region much warmer and drier in the past 30 years and will continue to make weather more extreme and wildfires more frequent and destructive.

The U.S. Drought Monitor reported this week that while a robust monsoon has delivered drought-easing rainfall to the Southwest, critically dry conditions persist across Northern California and the Northwest, where there has been an expansion of “exceptional drought,” the worst category.

“Fire weather and the conditions of the fuels across the country continue to challenge wildland fire managers,” an agency statement said.