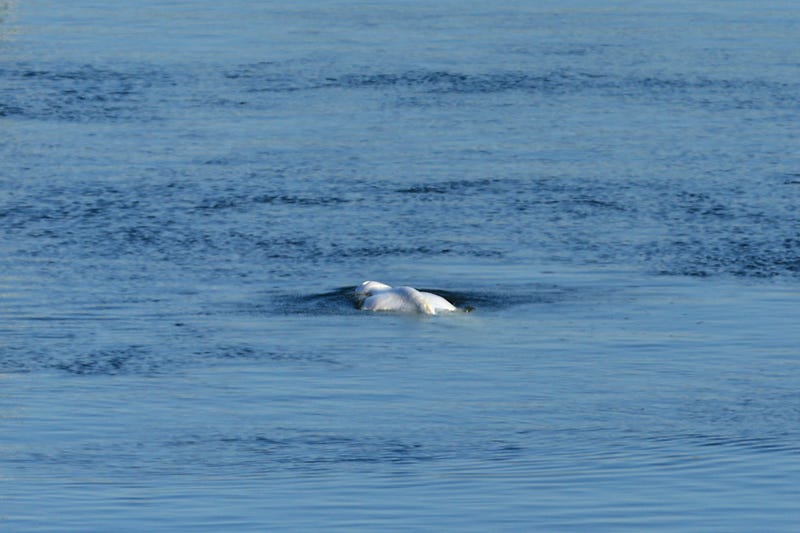 PARIS (AP) — A beluga whale that became a French celebrity after a wrong turn took it up the Seine River had to be euthanized Wednesday after experiencing health complications during an urgent rescue operation, authorities said.

The sparkling white marine mammal appeared deep inside France last week, having accidentally veered off the normal ocean migration route that takes belugas to and from Arctic waters.

Fearing the malnourished creature would not survive in the Seine much longer, a wildlife conservation group and veterinarians planned to move the lost whale to a saltwater port in Normandy, from where they hoped to return it to the open sea.

A team of 80 people assembled to try to save the animal's life, and it was successfully moved Tuesday night from a river lock in Saint-Pierre-la-Garenne, west of Paris, into a refrigerated truck for the 160-kilometer (99-mile) journey to the port in Ouistreham.

But during the drive, the 4-meter-long (13-foot-long) whale started to breath with difficulty, according to Florence Ollivet Courtois, a French veterinarian who worked on the rescue operation.

“During the journey, the veterinarians confirmed a worsening of its state, notably in its respiratory activities, and at the same time noticed the animal was in pain, not breathing enough,” Courtois said.

“The suffering was obvious for the animal, so it was important to release its tension, and so we had to proceed to euthanize it,” she added.

Environmentalists had acknowledged the plan to move the beluga risked fatally stressing the mammal. But marine conservation group Sea Shepherd said that it couldn’t have survived much longer in the Seine’s fresh water.

The group and veterinarians noted the whale had responded to a cocktail of antibiotics and vitamins over the last few days, making them hopeful it would recover once it was back in a saltwater environment.

A necropsy is planned on the whale, which weighed about about 800 kilograms (1,764 pounds).

Rescuers had hoped to spare the whale the fate of an orca that strayed into the Seine and died in May. In 2006, a bottlenose whale — nicknamed “Willy” — swam up the Thames River as far as London and died during a its attempted rescue.

Another complicating factor during the beluga’s rescue attempt was the extreme heat gripping France. Authorities tried to keep it cool and wet with soaked towels and moved it at nightfall when temperatures are at their lowest.

The sad end to a saga that gripped France in recent days came after experts determined the whale “was too weakened to be put back into water,” Guillaume Lericolais, the sub-prefect of France’s Calvados region, said.

Rescuers tried to feed the whale fish without success since Friday. Sea Shepherd France said veterinary exams after the beluga’s removal from the river showed it has no digestive activity.