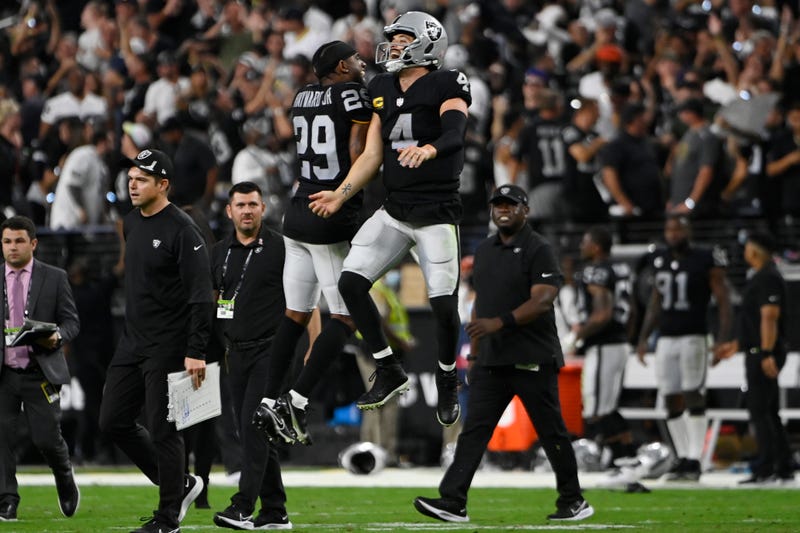 LAS VEGAS (AP) — After a premature bench-clearing celebration and a couple of blunders that almost cost the Raiders the game, the party could finally begin for real after the first game with fans in Las Vegas.

The Raiders won an exhilarating and exhausting season opener thanks to a furious rally, a stellar defensive play from Carl Nassib and a perfect play call that produced a 31-yard touchdown pass from Derek Carr to Zay Jones that gave the Raiders a 33-27 win over the Baltimore Ravens on Monday night.

“Felt like I died and woke up. And died. And woke up again," coach Jon Gruden said. “I was like a cat — I had multiple lives.”

Carr engineered three game-tying drives in the fourth quarter and before winning it in the wild overtime.

He appeared to win it with a 33-yard TD pass to Bryan Edwards on the first possession of overtime only to have the celebration halted when replay put the ball at the 1.

An unsuccessful QB sneak, a false start from rookie Alex Leatherwood and then an interception that deflected off Willie Snead's hands appeared to cost the Raiders the game.

Then Nassib delivered the strip sack of Lamar Jackson in his first game since becoming the first active NFL player to come out as gay in the offseason.

“I’m really happy that we got we got the win on the day that kind of made a little bit of history,” Nassib said.

The Raiders then made another blunder by committing a delay of game before a field goal try, leading to Gruden sending the offense back on the field.

The Ravens sent a blitz and Carr lofted a pass that Jones ran under for the score, sending the Raiders pouring out on the field for a second celebration.