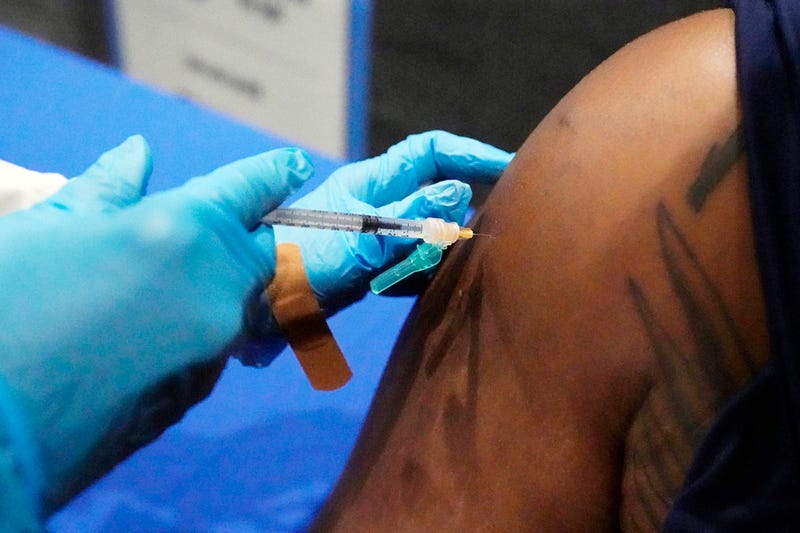 NHL Commissioner Gary Bettman let out a faint cough and assured those seated at least 6 feet away that it was allergies, not COVID-19. He had tested negative for the coronavirus three times in the previous week.

It allowed the fully vaccinated 69-year-old the opportunity to underscore the message that the virus is still part of the NHL and other professional sports leagues 19 months into the pandemic.

“It’s no joke,” Bettman said. “We’re still dealing with COVID, although not in the same ways.”

U.S. sports have successfully forced more athletes and staff to get vaccinated than many other industries, in part because the threat of losing pay is so severe. Yet, the outliers have and will continue to get more attention and generate outrage from fans who want to see stars play.

They're in the shrinking minority.

Major League Baseball, in the middle of its postseason, reports 87.4% of players and key staff are fully vaccinated. The NFL through six weeks of its season is at 94%, with 133 active players who have not had at least one dose . NBA Commissioner Adam Silver said Monday his league is at 96% with the chance for that number to tick up. Bettman noted last week the NHL had only four unvaccinated players out of more than 700 — well over 99% fully vaccinated.

"If given grades, those are A-pluses," said former women's basketball player Iciss Tillis, who is now a labor and employment attorney at the law firm Hall Estill. “It’s been really interesting to watch the transition over the past year and a half go from extreme skepticism to, I guess, people being able to see friends and family go ahead and get the vaccine first and sort of see how they react to it. I think that’s playing a huge role in this shift that we’re seeing towards people pretty much just giving in and just going ahead and taking the vaccine.”

None of those leagues has a full mandate, but all imposed rules treating differently players who are fully vaccinated. In addition, some cities and states put further requirements on players and coaches, especially those at state universities such as Rolovich. Daily coronavirus testing, mask wearing and restrictions on movement made more players choose to be vaccinated — as did the threat of losing pay.

The NBA's Brooklyn Nets begin the season without Irving, who cannot play or practice at home because of a New York City vaccine mandate. The team told him he couldn't play — even in road games — until his status changes. Irving and other unvaccinated players around pro sports don't get paid for the games they miss.

“For athletes in particular, their livelihood is based on their ability to compete,” said Dr. Wendy King of the University of Pittsburgh, who took part in a research project on vaccine hesitancy earlier this year. “Even if they thought, ‘Oh, I’m pretty healthy and I wouldn’t get that bad of a case,’ it would still heavily impact their ability to go to work, to play in a game. It could affect their entire team — not just them — so they might feel like they’re letting other people down if they don’t do everything they can to prevent the disease.”

Dr. Panagis Galiatsatos of Johns Hopkins University said job security and the threat of losing pay likely led to such a high vaccine uptake among athletes. “I think that’s a powerful thing,” he said.

It convinced some to get jabbed.

Golden State Warriors forward Andrew Wiggins — who faced a potential absence similar to Irving's because of a local mandate — decided to get a COVID-19 vaccine to be eligible to play. The NHL's agreement to go to the Olympics requires all participants to be fully vaccinated, which could lead New Jersey Devils goaltender Mackenzie Blackwood to change his mind, as well.

Isolated absences are expected, Bettman said, because of the highly contagious delta variant.