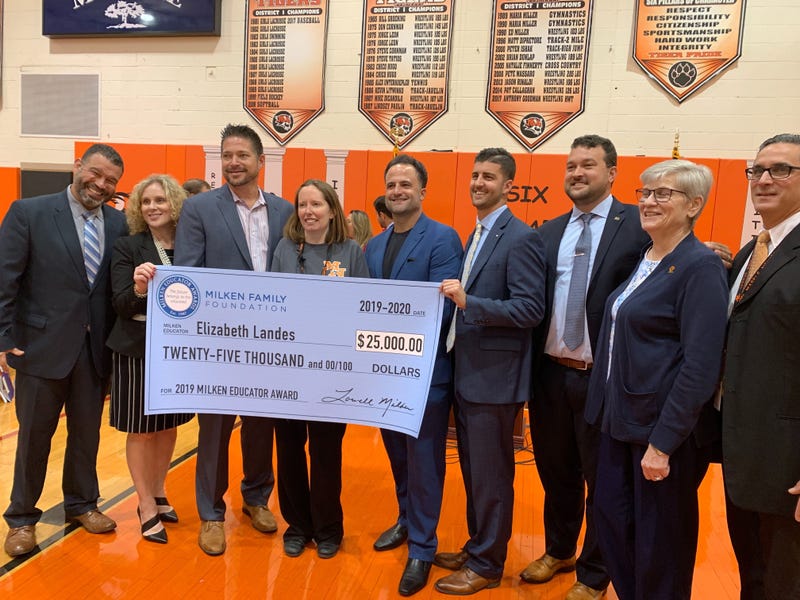 NEWTOWN SQUARE, Pa. (KYW Newsradio) — A Delaware County teacher received an important award Thursday morning. She had no idea it was coming.

"This is absolutely the biggest gold star I’ve ever gotten as a teacher," said Marple Newtown High School science teacher Elizabeth Landes. "I mean, I don’t know if there’s a bigger gold star. This an incredible honor."

"I was shocked," said Landes. "It was surprising. It's a very nice surprise."

Dr. Jane Foley, with the Milken Family Foundation, says the award is often referred to as the Oscars of teaching.

"We believe this is given to educators who are the elite of their profession," Foley said.

She says about 40 teachers typically receive a Milken award each year. And this year, only one is in Pennsylvania.

Joe Downs, a 10th grader who was a student of Landes’ in honors 9th grade biology, was in the gym when her name was called and she was given a $25,000 check.

"Well, before they called her name, actually, I was thinking, 'Mrs. Landes deserves this,' " Downs said.

Landes says all she’s ever wanted to do is teach.

While Landes' teaching is award winning, 11th grader Amanda Ly says it’s the connections she builds in the classroom that inspire her students to learn.

Both students explain what makes her a special teacher.

"It’s so important to her that her student gets the content," Downs said.

"It’s like a safe haven for us (in the classroom)," said Ly.

"When she cares, she shows that effort, and you want to give that effort back," he said.

"Like, you’re not afraid to ask questions," she said.

"You’re in it together. When you pass, you’re so happy, but she’s happy with you," he said.

Asked how she plan to spend the no-strings-attached award, Landes said, "I have no idea right now. I’m going to have to think about that. This is all just a big surprise,"