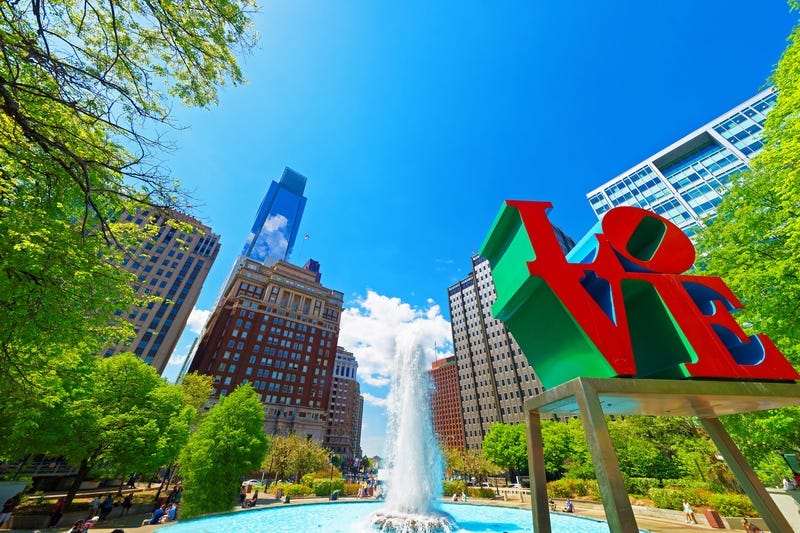 PHILADELPHIA (KYW Newsradio) — The Philadelphia Parks Department has some good news for hundreds of people who stood in line, more than a year ago, to buy a block of the legendary LOVE Park granite, with a likeness of Robert Indiana's sculptured etched on it. The city finally has permission to sell the souvenirs.

"We are incredibly excited to receive the approval," Parks and Recreation Commissioner Kathryn Ott Lovell said.

She has been working on liberating the granite keepsakes since Black Friday of 2017. They were intended as a fundraiser: $50 each for the 3" x 3" blocks, to be sold at the Christmas village in LOVE Park. But that morning, the foundation that owns the rights to Indiana's work issued a cease-and-desist letter.

So instead, the city took the names of those interested. The line of sentimental would-be buyers snaked through the park.

Lovell says the protracted, complex process that followed taught her a lesson.

"It is not always easier to ask forgiveness than permission," she said. "So, I've learned quite a few lessons through this process."

Also, persistence pays off. On Thursday, the people who signed up for the blocks recieved instructions for how to — finally — buy them.

"To be honest, I thought they forgot about us," said Bob Coyle, who was among those who stood in the cold and left empty-handed in 2017.

Coyle was among the first to learn the blocks are now available.

"I understand it's a limited number, so I feel special," he said.

He says he couldn't be more pleased at how it turned out.

"I'm so excited about it. Believe me, it's going to be displayed prominently. It'll be a treasured keepsake," he said. "One of our first dates was here at LOVE Park, and we took our picture in front of the "LOVE" statue."

More people signed up than there are blocks available, but Lovell says the city will be making a new batch. It will only have the park logo, not the sculpture image, but it's still the original LOVE Park granite.