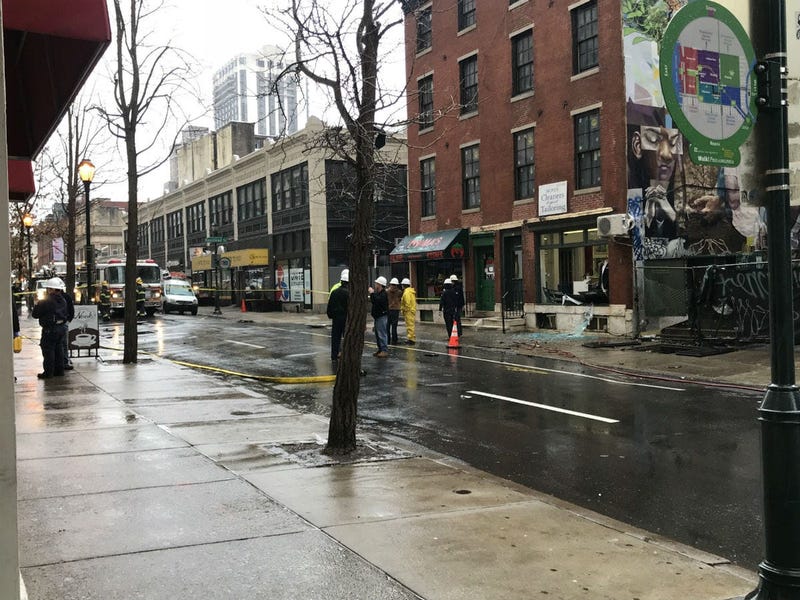 PHILADELPHIA (KYW Newsradio) — Crews from the Philadelphia Fire Department, PGW and PECO are on the scene of an underground explosion on 20th Street in Center City between Chestnut and Ranstead streets.
There are no reported injuries, but investigators below street level are trying to determine exactly what caused the explosion around 7 a.m. Tuesday.

Underground explosion along 20th near Chestnut in center city causes damage to at least one business. pic.twitter.com/5LeKdTvRXI

More than one manhole was blown out of the street, and large, metal access panels to underground transformers — weighing 300 to 400 pounds — were blown off into pieces.

"I was inside the restaurant, and (I heard) a big, big explosion. Whole building was shaking like, like an earthquake," he said.

When he went outside to see what had happened, he saw smoke.

"It really was scary, and I look in to my neighbor. The windows came down, and I have to go look around inside and see if my neighbor, she was OK. And she was really lucky, she was inside, all the way, up inside the store," he said.

Others on the scene agreed: Pedestrians, homeowners and business-owners are all very lucky, because on any other day, if the weather were better and more people were around, injury would have been far more likely.

PGW crews are measuring for gas leaks. Firefighters are going in and out of neighboring businesses. Crews are uncertain whether the explosion involved any PECO electrical equipment.

A coffee shop across the street also had damage to its window. Some businesses were evacuated due to high levels of carbon monoxide.

A PECO spokeswoman reported there are no customers affected, but 20th Street is shut down between Market and Chestnut streets.

This incident was not far from where a sinkhole opened up recently. Whether Tuesday's explosion was weather-related or had anything to do with the repairs of that earlier sinkhole is unknown.