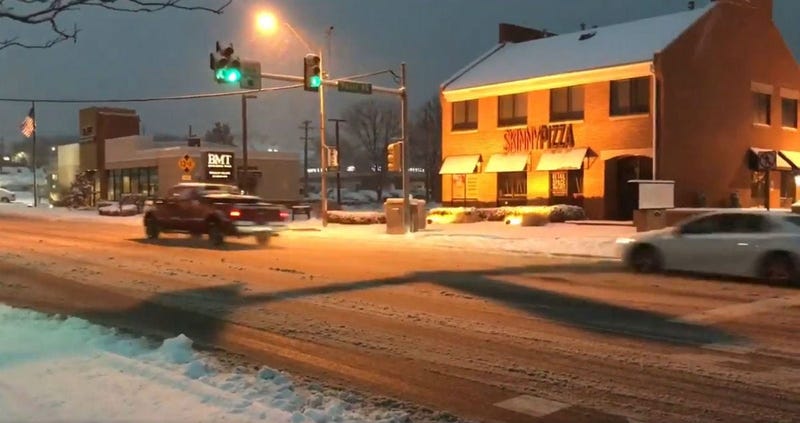 The fast-falling, wet and heavy snow already cancelled 14 flights at Philadelphia International Airport on Friday morning. All of the eight cancelled departing flights were scheduled to take off in the morning.

The airport is warning travelers to repeatedly check their flight status with their airline before coming to the airport, as the weather will likely force more cancellations throughout the morning.

Our #PHLairport snow crews are busy clearing runways and deicing planes this morning. Winter weather ❄️ advisory in effect. Some cancellations and delays reported. Check flight status with your airline before coming to the airport #PHLsnow pic.twitter.com/lPjxqmVwSZ

PennDOT says crews have been out salting and prepping area roads since Thursday, and trucks and plows are still out there running in areas where the snow has been a little heavier. Spokeswoman Ayanna Williams says drivers won't have to worry about any surprise slick spots, because she says they should assume all roads are slick.

The KYW Traffic Center reports that all Delaware River bridges have reduced the speed limit to 25 mph due to the weather conditions. And there are some accidents and disabled vehicles causing delays on Philadelphia-area highways.

295 North near 561 an accident is blocking the left lane pic.twitter.com/RjL2dVpD6N

SEPTA isn't reporting any issues with their train schedule this morning, but they do warn riders to use caution during travel, because platforms, parking lots and vehicles may be slippery. NJ Transit and PATCO aren't reporting any issues either at this time, but when snow falls, trains do tend to run at slower speeds, which can lead to some minor delays.