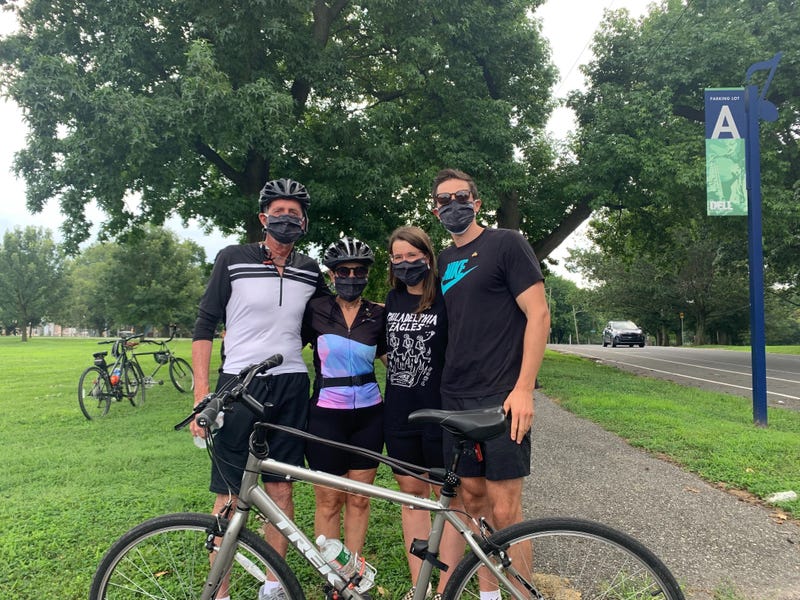 PHILADELPHIA (KYW Newsradio) — Philadelphia's biking community remembered one of their own Sunday, who was killed in a hit-and-run. Now they're also calling on the city to do more to protect bicyclists.

32-year-old Will Lindsay is one of three cyclists in Philadelphia killed in the past 30 days.

"He loved biking. In fact, he drug us out all the time to go biking," remembered his father, Bill Lindsay. "It was a passion of his. In fact, he was a very passionate person."

Lindsay helped organize a ride Sunday for his son, who was killed by a hit-and-run driver on July 12 in the Strawberry Mansion section of the city.

He said the ride is, in part, a call to action.

"The city must realize that there's got to be more safety measures put into place, especially on Ridge Avenue here, where Will got struck."

"We need definite bike lanes for these people in the city, in order to navigate through the city," she asserted.

Before the 12-mile ride from the Dell Music Center to Laurel Hill Cemetery, where Will was killed, Monica reflected with other riders about her son's impact on Philadelphia's riding community.

"He was such a good rider who actually taught us some things about riding through the city," she said. "It's going to be a little scary today for me to get back on the streets."

Will's sister Emma Lindsay joined her family for the ride as well. "It feels kind of good just to represent him, by what his passion was doing. It's scary, but I just want to live out something he loved to do."

In recent years, the city has worked to reinforce cyclists' safety with enhanced bike lanes as part of its Vision Zero program, which aims to reduce traffic deaths to zero by 2030.

The Lindsay family is asking for the city to make that program a priority. They are also asking the public to help find the person responsible for Will Lindsay's death.

"We have pictures of a suspected car," said Will's brother Phil Lindsay. "The Philly police have posted and all the help we can get to identify this car or this individual would be infinitely appreciated."

The Fraternal Order of Police have offered a $5,000 reward for information given to police leading to the arrest of the driver who killed Lindsay.