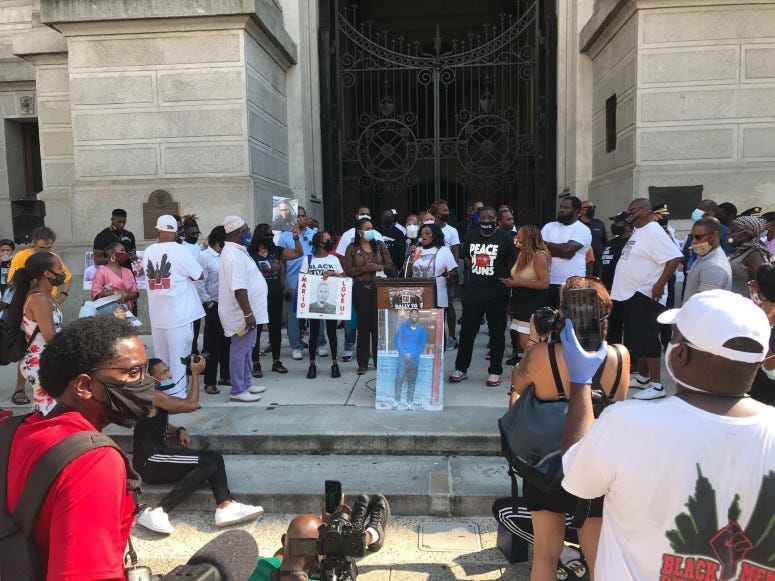 PHILADELPHIA (KYW Newsradio) —Scores of activists, community members and elected officials took part in a Peace Not Guns Rally Monday outside of Philadelphia City Hall after two violent weeks in the city. A special committee of City Council will also hold an emergency public hearing to address the issue of gun violence in Philadelphia.

The hearing, starting on Tuesday, will take place virtually over the course of two days to allow the public to speak and to give time to law enforcement and city officials to answer questions.

Councilman Kenyatta Johnson has his own questions.

He said it had been in the works, and it became more urgent after 7-year-old Zamar Jones was shot while playing on his porch Aug. 1. Then this past weekend, as Jones was laid to rest, there were roughly 10 more separate shootings — with victims including two 11-year-old boys and a pregnant woman. Both children and the woman and her baby are expected to be OK.

On Sunday night an 11-year-old was one of three victims in a shooting in Grays Ferry. Police say the child was caught in the crossfires on South Napa Street during a family barbeque. A 43-year-old woman and 31-year-old man were also shot.

The boy suffered a graze wound to the back. Police believe the 31-year-old was the intended target but aren't sure why.

An 11-year-old boy was also shot Saturday night in Olney while walking down A street. That boy suffered a graze wound to the head and shoulder.

On Saturday night, six people were shot on the Clayborn and Lewis playground near 38th and Poplar streets, including a pregnant woman. All the victims, who are between 17 and 59, are expected to be OK.

“Enough is enough," Johnson said. "We can’t sit idly by while our children, our women and our young men are gunned down in the streets of Philadelphia.”

He also organized the rally Monday afternoon, which featured comments by anti-violence activists, youth and some city officials.

Young activists speak out about the despair of some of the young shooters on both sides of the gun. They all say- we must step up and help the youth to stop #GunViolence, parents, siblings, everyone must do their part. @KYWNewsradio @CouncilmemberKJ #PeaceNotGuns #StopShooting pic.twitter.com/Dgm3mj8AJu

The group called an emergency hearing designed to call the district attorney, police department and city officials to task.

"It’s not about pointing fingers. It’s about making sure we are all working partnership, collaboratively together to deal with this issue," said Johnson.

Much of the event gave voice to the outrage and pain of a community traumatized by shootings and murders.

"That neighborhood where Zamar got shot, that was my hood," said one 27-year-old. "I’m doing the work. There will be no more Zamar Joneses.”

She’s a four time survivor of gun violence, having most recently lost her son Charles in 2011 — he was gunned down because of mistaken identity.

“It’s a pain you never forget,” she said, “I have dedicated my life to this so no one else has to feel that pain.”

Others questioned where all the high powered weapons come from.

“The artillery that I am seeing right now is not the same as what I had access to as a young man in South Philadelphia,” said Johnson. “We talk about institutional racism, let’s see how many resources they allocate to figuring out where these guns are coming from.”

“They don’t want to pick up a gun but they feel they don’t have an option,” said one young activist when discussing gun culture.

Philadelphia Mayor Jim Kenny, members of City Council and police officials, stood and listened to the rally for more than 90 minutes.

“All day I’ve heard accountability and alternatives. It’s not either ‘or,' it’s an ‘and,’” Outlaw said. “This is bigger than just the police. We are a community, so it’s going to take all of us.”

This year, there have been more than 250 homicides — a 30% increase over this time last year. Of those deaths, 100 of the victims were kids.