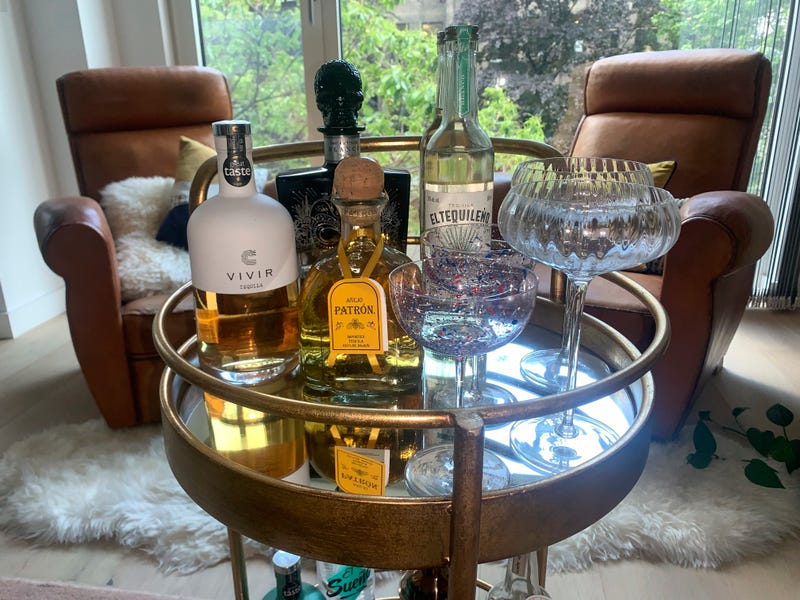 LONDON (AP) — Love it or hate it, tequila conjures up strong feelings in many drinkers.

“Forgive us for the old memories of bad quality tequila!” jokes Antonio Rodriguez, director of production at Patrón Tequila. “We cannot hide that we come from a history when usually tequilas were not as premium as they are right now.”

Deano Moncrieffe, founder of the London tequila and mezcal bar Hacha, laments, “People always blame tequila for a bad hangover when really the fact is that they probably started the night drinking wine and then beer and then champagne and then at some point, maybe 2 or 3 in the morning, someone said, let’s have tequila!”

And Steffin Oghene, vice president of global marketing and sales for El Tequileño Tequila, agrees tequila used to be seen as “the party, smash-it-down, get-wasted kind of spirit.”

But, he says, “Over the past 10 years, there’s been a lot of effort put into educating people and making them understand that tequila isn’t just the spirit to shoot. It’s a really complex spirit" that takes time and expertise to produce.

These re-education efforts appear to be working. Tequila is one of the fastest-growing alcoholic drinks in the U.S., with consumption up by 40% over the past five years, according to IWSR Drinks Market Analysis.

Hamish Smith, editor of the bartending magazine Class and bars editor of Drinks International, says there's growing understanding of tequila's different qualities, with “100% agave" now the star performer, in the way single malt is for Scotch.

“This awareness is set against the craft spirits movement, the appreciation of provenance, celebrity endorsement and a cocktail industry that has been showcasing quality tequila for years," Smith says. "It’s not quite a perfect storm, but it’s carrying the category forward to year-on-year international growth.”

Despite its old reputation, experts say tequila is not in fact a great choice for people looking to get drunk. While many spirits contain glucose, which causes a rapid increase in blood sugar followed by a crash, adding to a hangover, tequila contains fructose from the agave plant, which they say is broken down more slowly.

For a premium tequila, don't use a shot glass, says Nitzan Podoswa, founder of Satryna Tequila.

“Your nose is too close to the liquid so you cannot really smell the notes right. It just makes it easier to drink. But if you are having a very nice tequila, you need to have a flute cup,” she says.

And rather than down it in one, swish the liquid around the mouth to taste, she suggests.

There are three types of tequila, based on the time spent in oak barrels before bottling. Blanco is aged 0-2 months, reposado 2-11 months, añejo 1-3 years and extra añejo 3-plus years.

Moncrieffe starts by asking his customers what they usually drink. If it’s a white spirit, he directs them to a blanco; for bourbon or whisky drinkers, he recommends a reposado; and for cognac drinkers, something more complex like an añejo or extra añejo.

An agave plant takes around seven years to mature, and once harvested there are many ways to cook the plant and ferment and distil the alcohol.

“We are not talking about whiskeys in which the main flavor is coming from the wood," he says. "Tequila by itself in a blanco expression has already a big personality. So when you age tequila, you are not looking to get over that. You’re looking to complement that.”

“There’s also the cristalino category, which I guess was, for tequila purists, controversial,” Oghene adds. Popular in the U.S. and Mexico, a cristalino is an aged tequila that has been filtered to remove the color and tannins, making it crystal-clear.

“Most of the rest of world has had sort of bad, cheap tequila," says Jenna Fagnan, co-founder of Teremana Tequila with Dwayne “The Rock” Johnson. She says that for Johnson, tequila is about “togetherness.”

Johnson joins a list of celebrities including George Clooney, Nick Jonas and Kendall Jenner with their own tequila brands. That's been greeted with mixed feelings in the industry.

“Almost every week you have a new celebrity tequila brand coming out,” Rodriguez says, “with only roughly 160 distilleries to produce tequila for thousands of brands.”

That means multiple brands might be produced in the same place; while many are doing it right, he says others are just buying the liquid and putting it in a different bottle.

Podoswa advises consumers to research a brand before buying.

“Are they making a good product? Are they taking care of their agave? Are they doing it the artisanal, traditional way?”

Fagnan says she and Johnson work with one of the few family-owned distilleries left in Mexico. She says Johnson “cares about the people, the story, the sustainability.”

“If these people are willing to drink tequila, these major celebrities, they’re not just doing shots of it right in a bar. They must be drinking in a different way. How are they doing and why are they drinking it?” he says.