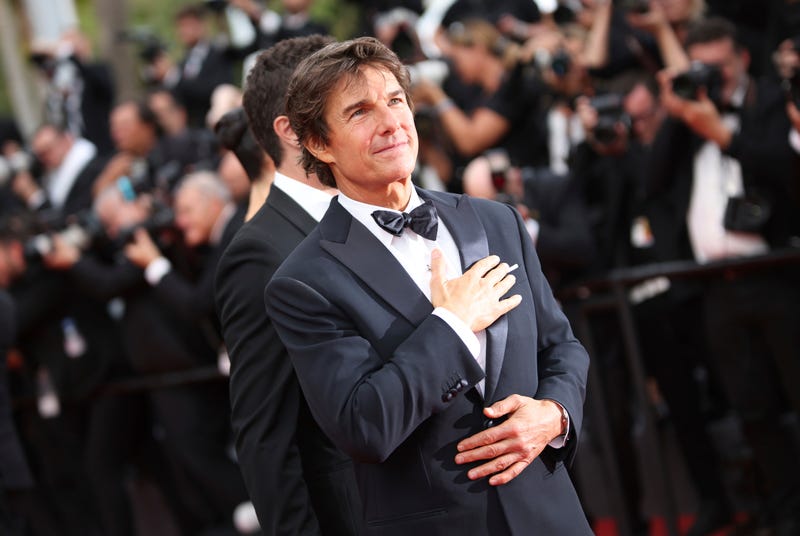 CANNES, France (AP) — Tom Cruise mania descended Wednesday in Cannes where the actor made a whirlwind appearance at the film festival, walking the red carpet, receiving a surprise Palme d'Or and watching a squadron of French fighter jets fly over the European premiere of “Top Gun: Maverick.”

Cannes pulled out all the stops to fete the 59-year-old star, paying tribute to Cruise with not just a rare interview on stage and a red-carpet premiere featuring a flyby of jets trailing colored smoke, but with the unexpected presentation of an honorary Palme d'Or. Festival president Pierre Lescure announced the award — about 15 honorary Palmes have been given before — on stage just before the screening was to begin. Cruise clutched Cannes' top prize while the audience gave the actor a standing ovation.

Cruise brought a palpable buzz to the Croisette, where throngs gathered around the Palais des Festivals shouting “Tom!” to try to get a glimpse of the 59-year-old star. “Great Balls of Fire” blared on the carpet.

Cruise hadn't been to the festival in three decades. But with plenty of media disruption challenging the theatrical experience, Cannes and Cruise exuded the vibe of long-last pals. “He is devoted to cinema,” declared artistic director Thierry Fremaux. Cruise's enthusiastic welcome smacked in some ways of an action hero's reception, here to save the day.

“I make movies for the big screen,” Cruise said to applause in an interview on stage at Cannes' Debussy Theatre.

The European premiere of “Top Gun: Maverick,” directed by Joseph Kosinski and produced by Jerry Bruckheimer, brought out what's likely to be among the most star-studded red carpets of the Cannes Film Festival, which opened Tuesday and runs through May 28. Among those in attendance were Viola Davis, Dakota Fanning, Omar Sy and Eva Longoria — along with “Top Gun: Maverick" stars Miles Teller, Jennifer Connelly, Jon Hamm and Glen Powell.

While Cruise arrived by helicopter at the film's San Diego premiere aboard an aircraft carrier, he came to the Cannes premiere more traditionally, with the film's cast and filmmakers in a cavalcade of cars. Cruise paused for several minutes to sign autographs and take pictures with fans lined up across the street from the red carpet.

Before that, the festival honored Cruise with a tribute that consisted of a career-spanning video montage, after which Cruise spoke about his dedication to filmmaking in an interview that stayed away from any personal questions. Instead, he responded to prodding from interviewer Didier Allouch about why, Monsieur Cruise, do you take such risks doing your own stunts?

“No one asked Gene Kelly ‘Why do you dance?’” answered Cruise.

The Cannes stopover for “Top Gun: Maverick” is part of a worldwide tour for the film ahead of its May 27th launch in theaters. It has already touched down at CinemaCon in Las Vegas and premiered in San Diego. Paramount Pictures delayed its release two years during the pandemic, a move that appears to be paying off with glowing reviews and box-office expectations that “Top Gun: Maverick” will easily mark Cruise's biggest opening weekend ever.

Asked if he was ever tempted to steer the film to a streaming service, Cruise replied emphatically.

Cruise spent the majority of the conversation explaining his extreme dedication to the craft of moviemaking, how from an early age he dug into every element of film productions and analyzed how particular modes of acting worked best on the big screen. Shooting the 1981 film “Taps,” with George C. Scott, he returned to it again and again as a formative experience.

“Please," Cruise said he thought at the time, "if I could just do this for the rest of my life, I will never take it for granted.”