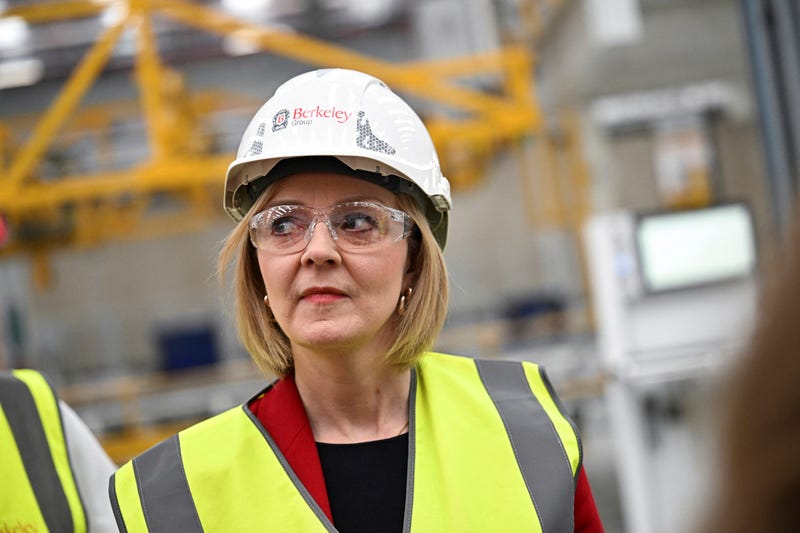 LONDON (AP) — British Prime Minister Liz Truss on Thursday defended her divisive economic plan and shrugged off the turmoil it has stirred in financial markets, saying she’s willing to make “controversial and difficult decisions” to get the U.K. economy growing.

In her first public comments since her Conservative government announced billions in unfunded tax cuts last Friday that drove the pound to record lows, Truss said Britain was facing “very, very difficult economic times." But she said the problems — namely high inflation driven by soaring energy prices — were global and spurred by Russia’s invasion of Ukraine.

She spoke after the Bank of England took emergency action Wednesday to stabilize U.K. financial markets and head off a crisis in the broader economy after the government spooked investors with sweeping tax cuts that many see as benefiting the wealthy, to be paid for by a surge of public borrowing.

Truss told BBC that she had to “take urgent action to get our economy growing, get Britain moving and also deal with inflation.”

“Of course, lots of measures we have announced won’t happen overnight. We won’t see growth come through overnight," she said. “What is important is that we are putting this country on a better trajectory for the long term.”

In a series of radio interviews, Truss said her government’s decision to cap energy bills for households and businesses would help tame inflation and help millions of people facing a cost-of-living crisis.

But it was not that decision that alarmed the markets. It was the government's announcement of an economic stimulus program that included 45 billion pounds ($48 billion) of tax cuts and no spending reductions — without an independent economic assessment of the cost and impact.

The Bank of England warned that crumbling confidence in the British economy posed a “material risk to U.K. financial stability” and said it would buy up to 65 billion pounds ($70 billion) in long-term government bonds, known as gilts, over the next two weeks to counter “dysfunction” in the bond market.

The central bank made the emergency move after the pound touched a record low against the U.S. dollar and government borrowing costs spiked on concerns the tax cuts would fuel inflation and drive up interest rates. It stepped in amid a run on pension funds, which were forced to sell government bonds to head off worries over their solvency, which threatened severe losses to workers' retirement funds.

The bank's action helped stabilize the British currency and the bond markets. The pound rose to $1.10 on Thursday, above its record low of $1.0373 on Monday. It has lost 2% of its value since Friday and almost 20% in the past year.

But many economists say the relief will only be short term unless the Conservative government acts to restore confidence in the markets.

Former Bank of England chief Mark Carney said the government's pro-growth plan was working “at cross purposes” to the central bank, which is trying to rein in inflation that's running at 9.9%, near 40-year highs. This meant “an undercutting of some of the institutions" underpinning economic stability, Carney told the BBC.

But he said there was no need for the bank to call an emergency meeting to raise interest rates. The bank, which raised its key rate to 2.25% last week, isn’t scheduled to meet until Nov. 3.

“This is a robust, resilient system, it has had a big knock, but it will move forward and … the Bank of England can take its decision in the right time frame," Carney said.

Truss was appointed prime minister on Sept. 6 after winning a Conservative Party leadership vote to replace Boris Johnson, who stepped down in July after a three-year term tarnished by ethics scandals.

Yet after less than a month in office, she faces a pincer of negative reaction. Financial markets are alarmed at the inflationary impact of her policies, while polls suggest many voters see her tax cuts as chiefly benefiting the rich. In Friday’s “mini-budget," the government abolished the top 45% rate of income tax paid by the highest earners.

Meanwhile, Truss has rejected calls to extend a windfall tax on oil and gas company profits that have been soaring as the war in Ukraine sparked an energy crisis.

In her interviews Thursday, Truss was faced with questions from listeners struggling to pay their bills or forced to sell their homes because of the cost-of-living crisis. She denied a suggestion from a host on BBC Radio Nottingham that she was a “reverse Robin Hood,” taking from the poor to give to the rich.

“Having lower taxes across the board — everything from national insurance to corporation tax to income tax — helps everybody because it helps grow the economy,” she said.

The government says it will set out a more detailed fiscal plan on Nov. 23. Many economists say deep spending cuts are inevitable.

The turmoil has seen the opposition Labour Party open up a widening lead in opinion polls. A YouGov survey released Thursday gave Labour a 33-point lead over the Conservatives, up from an 8-point lead in the same poll a week ago.

Even economists sympathetic to the government’s strategy admit that its economic plan has been badly received so far.

"My advice would be to press ahead with the current plan, but to be much, much better at communicating it — and in particular, being much more sensitive to what the markets are worried about," said Julian Jessop, who has advised Truss on economic policy.

He acknowledged that the British government “is taking a gamble" in sticking to its long-term economic plan despite the backlash.

"There’s clearly a risk that that backfires in the polls and unsettles people with the feeling that the government hasn’t got their back," he said.