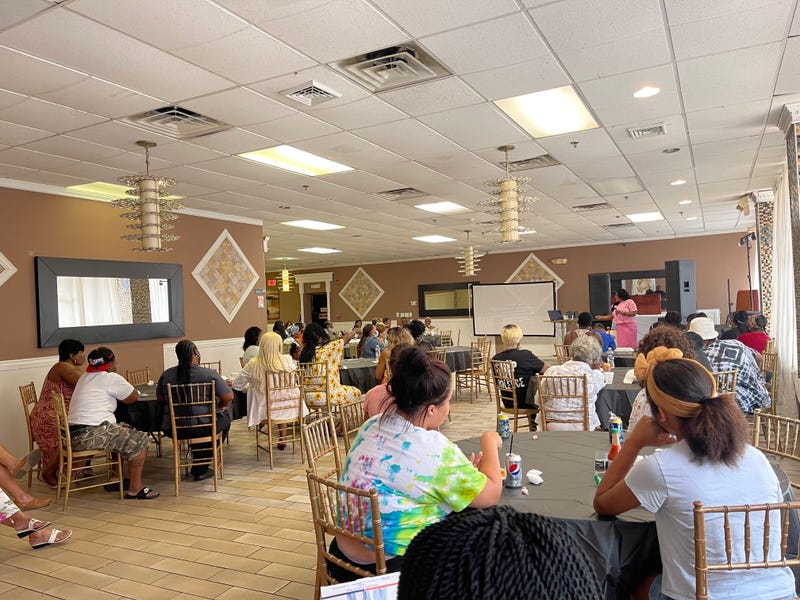 A gathering of the family members of violence victims at Mothers in Charge. Photo credit Antionette Lee
By Antionette Lee, KYW Newsradio

PHILADELPHIA (KYW Newsradio) — Mothers in Charge has been around for nearly 20 years, but as the rate of homicides continues to rise in Philadelphia, so has the need for their services.

Dozens of women — mothers, grandmothers and daughters — of gun violence victims filled the room on a recent evening at Cecil B. Moore Ave. and 16th Street in North Philadelphia, their eyes teary and faces sullen with heartbreak.

The program started with a hot meal to bring comfort to those in attendance. Then, a mini-documentary video created by the MIC team was played where they shared their stories of loss.

Tears fell and heads shook in agreement across the room from mothers who know the pain of dealing with losing a child. Eventually, many of the attendees took to the microphone and gave their own emotional testimonies.

“I was in my kitchen and heard gunshots,” said Angela Milbourne.

She said that 15 minutes later, the police arrived at her door and told her that her 33-year-old son, Amir Boston, had been shot and killed, right around the corner from her house.

Milbourne said she has yet to receive justice for her son's murder which happened last October, though she believes she knows the shooter.

She still lives in the same neighborhood, which has complicated the healing process even more.

“It’s very painful to have to see the person who has murdered your child. He rides up my block constantly. He’s around the corner from my house…I constantly see him everyday,” she said tearfully. 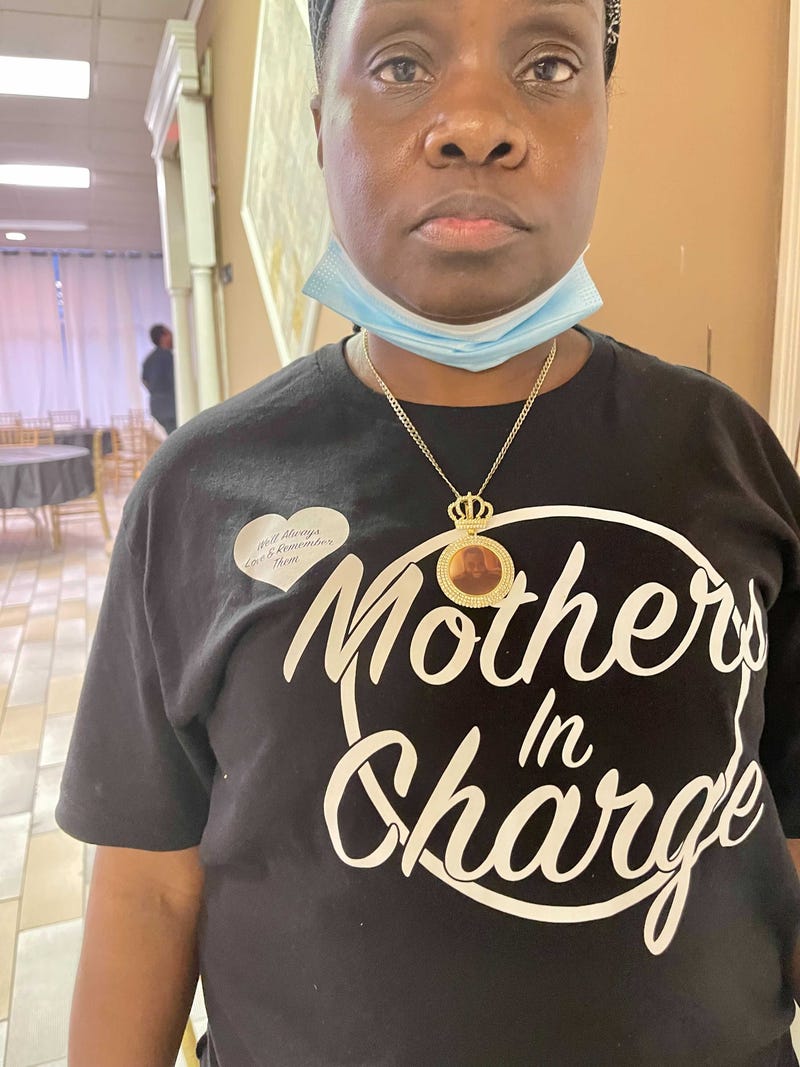 Tonya Warden’s son was also murdered in October of 2020.

“I miss my boy. And so do his siblings and his father. I pray that they put the guns down. They don’t understand this is traumatizing everybody. We are just praying for peace. I don’t know how we're going to get it, but we have to keep coming together to try to come up with a solution to stop this violence,” Warden said vehemently.

Warden wears a necklace with a photo of her late son around her neck. She said the grief process has been challenging for her and her young grandchildren that her son left behind.

“My grandson, it’s hard for him. He’s asking me to take him to the 'cave yard,' in which he’s talking about the graveyard,” she said.

For both of these women and the many others in attendance, they say the evening and the group has brought them some comfort during the challenge of losing a child.

“Without this group, I wouldn’t be able to get through. Every Thursday, I'm on zoom with either Dr. Fontes or Dr. Dorothy, because I need to be around people going through the same thing that I’m going through, that can help me get through my grief,” said Warden.

“During the grief that I’m going through, to know that you’re not alone and have that support from others who have experienced the same thing that you have, helps a lot,” Milbourne added.

And while they were all united for the same reason, many wanted the public to know that the gun violence in Philadelphia is far from normal.

“This isn’t normal. You have people out here taking lives, lives that you can never give back. You will never see your loved ones again. You will never love them, hold them, hear them speak, It’s not normal by any means,” said Milbourne.

“I need this group. I need Mother’s in Charge to really keep me going. I need to be around the support and the love and the hugs,” said Warden.

Grief counselors continue to remain in short supply in Philly, as the homicide rate is up by 30%.

Organizers want the public to know that Mothers in Charge has support services for survivors to take advantage of immediately.

The group hosts a number of weekly events, including trauma-informed grief support on Thursdays at 5:30 p.m. and mentoring for young people who have been affected by gun violence Tuesdays and Thursdays. Events are posted on their website and on Facebook, or you can call 215-228-1718 for services.