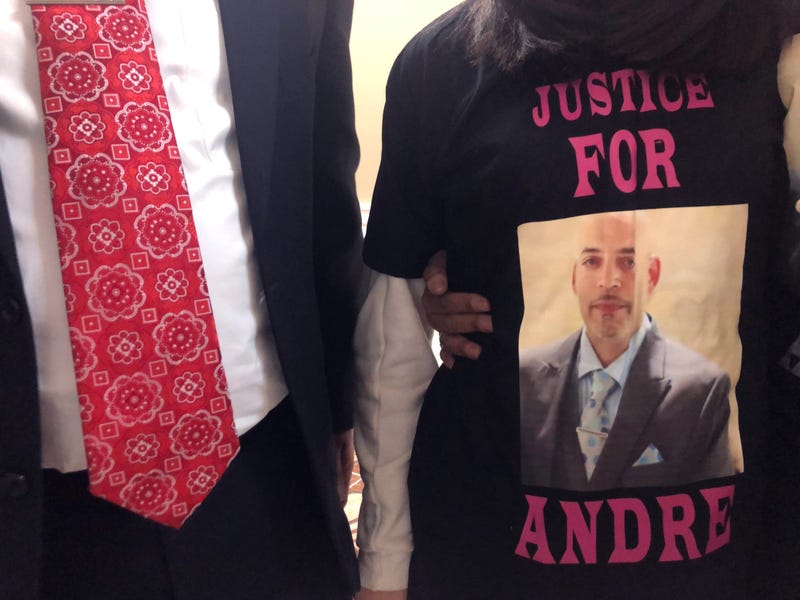 COLUMBUS, Ohio (AP) — Ohio’s capital city will pay a $10 million settlement for the family of Andre Hill, a Black man who was fatally shot by a white Columbus police officer in December as he emerged from a garage holding a cellphone, the Columbus city attorney announced Friday.

It's the largest such settlement in city history.

Hill, 47, was fatally shot by officer Adam Coy on Dec. 22 as Hill emerged from a garage holding up a cellphone. Coy was fired and has pleaded not guilty to murder and reckless homicide charges.

“No amount of money will ever bring Andre Hill back to his family, but we believe this is an important and necessary step in the right direction," Columbus City Attorney Zach Klein said in a statement.

As part of the settlement, a gym frequented by Hill will be renamed the Andre Hill Gymnasium.

At a news conference Friday afternoon surrounded by Hill's family, attorney Ben Crump said, “We come here to applaud the city leadership in saying Andre Hill’s life matters, and to send a message that we're better than this America.”

Hill's daughter, Carissa Hill, held her 3-year-old daughter as she called it a “a very big day for me and my family.”

“We’re just sad we can’t share that with our dad being here,” she said. As she once did, her daughter will visit the gym her father loved.

“The difference is, when I went, I was going with my dad,” Hill said. “When she goes to the gym, it will just be for my dad, in my dad’s name.”

Andre Hill's older sister, Shawna Barnett, said that, "the money is a good thing; but having Andre here would be better,” Barnett said.

Hill was visiting a family friend when he was shot. Coy and another officer had responded to a neighbor's nonemergency complaint about someone stopping and starting a car outside.

“He was bringing me Christmas money. He didn’t do anything,” a woman inside the house shouted at police afterward.

The shooting was recorded by Coy's body camera, but without sound because Coy hadn't activated the camera on what started as a nonemergency call. A 60-second look-back function on the camera captured the shooting.

Coy, who had a long history of complaints from citizens, was fired Dec. 28 for failing to activate his body camera and for not providing medical aid to Hill. He was initially charged for dereliction of duty for not activating the camera, but those charges were dropped.

Coy’s attorneys successfully argued the officer didn’t violate any duty because he was on a nonemergency run that didn’t require the cameras to be activated.

Beyond an internal police investigation, the Ohio attorney general, the U.S. attorney for central Ohio and the FBI have begun their own probes into the shooting.

The city is narrowing a list of finalists for the new chief, with an announcement expected by month’s end. All candidates are external, with Ginther saying an outsider was needed to enact broad cultural changes in the department.