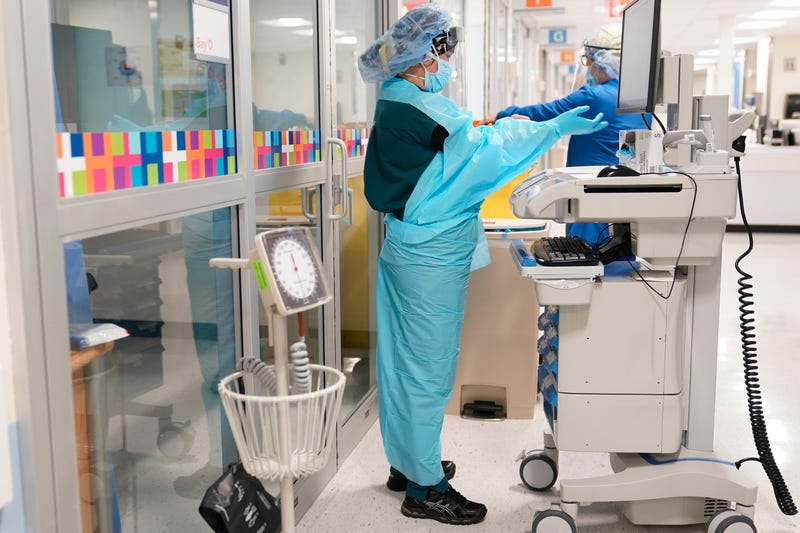 DES MOINES, Iowa (AP) — Even as a new surge of coronavirus infections sweeps the U.S., officials in many hard-hit states are resisting taking stronger action to slow the spread, with pleas from health experts running up against political calculation and public fatigue.

Days before a presidential election that has spotlighted President Donald Trump's scattershot response to the pandemic, the virus continued its resurgence Friday, with total confirmed cases in the U.S. surpassing 9 million.

The number of new infections reported daily is on the rise in 47 states. They include Nebraska and South Dakota, where the number of new cases topped previous highs for each state.

The record increases in new cases have eclipsed the spikes that set off national alarms last spring and summer. During those outbreaks, first in the Northeast and then in Sun Belt states, many governors closed schools and businesses and restricted public gatherings.

But this fall's resurgence of the virus, despite being far more widespread, has brought a decidedly more limited response in many states. Most are led by Republican governors backing a president who insists, falsely, that the country is getting the virus under control.

Over the past two weeks, more than 76,000 new virus cases have been reported daily in the U.S. on average, up from about 54,000 in mid-October, according to Johns Hopkins University. Deaths, which usually lag case numbers and hospitalizations, are also rising, from about 700 to more than 800 a day.

Nevertheless, many officials have resisted calls to enact measures like statewide mask mandates or stricter curbs on the size of gatherings, casting the response to the virus as a matter of individual decision-making.

Lee's state is among those without a blanket mask mandate despite a study released this week showing that areas of Tennessee where people are not required to wear them are seeing the most hospitalizations.

In Iowa, where a record 606 coronavirus patients were hospitalized Friday, one health expert said officials there had been too quick to reopen, along with several neighboring states.

“If we follow the course that the other Midwestern states like Wisconsin, North Dakota and South Dakota have, we’re going to have trouble keeping up,” said Dr. Ravi Vemuri, an infectious disease specialist at MercyOne hospitals.

Republican Gov. Kim Reynolds, who has rejected mask requirements and said Iowans must learn to live with the virus, continued this week to downplay efforts to contain it.

On Wednesday, Reynolds, who has made frequent campaign appearances for Trump and other candidates surrounded by crowds of often maskless supporters, poked fun at Theresa Greenfield, a Democrat running in a tight Senate race, for suspending a campaign tour after a staff member was exposed to someone who tested positive.

“Theresa didn’t get very far on her RV tour, did she?” Reynolds said. She went on to accuse Greenfield and other Democrats of “hiding in their basements.”

The pandemic has put similar pressures on states with Democratic governors, but the politics have played out differently.

Kansas Gov. Laura Kelly, a Democrat, has repeatedly tried to impose restrictions but been stymied by the Republican-controlled legislature. She is considering calling lawmakers into a special session to impose a statewide mask mandate.

In Wisconsin, where the virus has raged since September, Democratic Gov. Tony Evers pleaded with residents this week to shelter in place to slow the spread. Evers issued a formal stay-at-home order in March, but the state's conservative Supreme Court struck it down in May. He was subsequently sued over a mask mandate and limits on gatherings in bars and restaurants.

The parrying by governors and legislators reflect the way that politics and the personal beliefs of a significant sector of the population have become entangled with supposedly nonpartisan matters of public health.

Michelle Riipinen, a 38-year-old resident of Boise, Idaho, said state-mandated school closings, business shutdowns and mask requirements are “draconian measures” that do more harm than good. She said she chooses not to wear a mask.

“I believe in personal responsibility and that it is our responsibility as American citizens to choose if we want to wear it or not,” she said. “Our government shouldn’t be making that choice for us.”

In Utah, Republican Gov. Gary Herbert has ordered mask mandates and limited social gatherings to 10 people or fewer only in counties with the highest transmission rates, not the entire state. The latter measure includes exceptions for religious services and school events.

“This is not an easy thing to enforce. As you drive down the road, you talk about people getting tickets for speeding, but how many are actually speeding?" Herbert said when asked about his resistance to broader mandates.

Herbert said Friday he was “disgusted” after someone shot at a state health department office. The incident came a day after anti-mask protesters gathered outside the home of Utah state epidemiologist Dr. Angela Dunn, who recommended that the state reinstate restrictions to avoid overwhelming hospitals.

“It’s taken a really big toll on my family and myself,” Dunn said. “I think it’s really unfortunate we live in a state where people feel that it is OK to harass civil servants.”

Herbert, who has not heeded Dunn's recommendation, said protesters were within their rights to criticize him or other elected officials, but that they should leave state employees alone.

"I know we’re asking a lot of the people of Utah to be patient,” the governor said. “We know that their time is valuable. I would hope that they would put that in a constructive effort.”