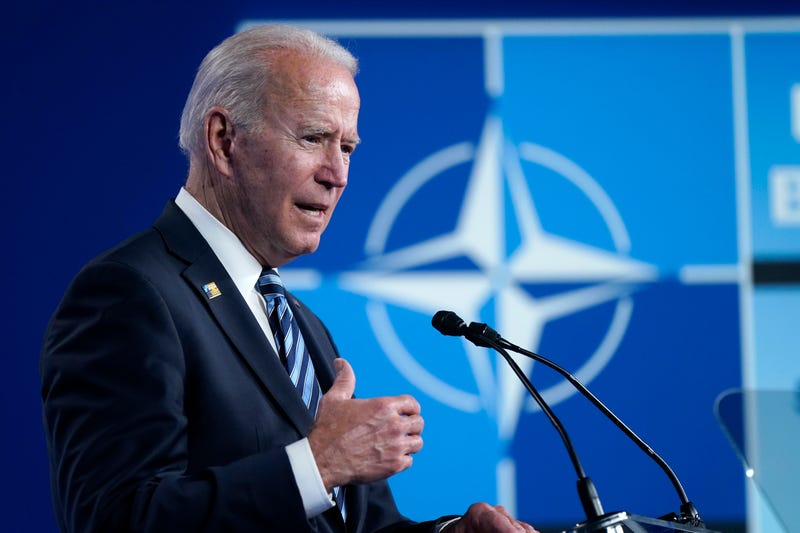 BRUSSELS (AP) — President Joe Biden used his first appearance at a NATO summit since taking office to call on Russian President Vladimir Putin to step back from provocative actions targeting the U.S. and its allies on Monday. NATO leaders joined the United States in formally accusing Moscow and Beijing of malign actions.

Biden's sharp words for Russia and his friendly interactions with NATO allies marked a sharp shift in tone from the past four years and highlighted the renewed U.S. commitment to the 30-country alliance that was frequently maligned by predecessor Donald Trump.

Biden, wearing a NATO lapel pin, said that in his extensive talks with NATO leaders about his planned meeting with Putin on Wednesday, all were supportive of his plans to press the Russian leader to halt Russian-originated cyber attacks against the West, end the violent stifling of political dissidents and stop interfering in elections outside its borders.

“I’m going to make clear to President Putin that there are areas where we can cooperate, if he chooses," Biden told reporters as he ended his day at NATO headquarters. “And if he chooses not to cooperate and acts in a way that he has in the past relative to cybersecurity and other activities, then we will respond, we will respond in kind."

Biden is on an eight-day visit to Europe in which he is seeking to rally allies to speak with a single voice on countering Russia and China.

To that end, NATO leaders on Monday declared China a constant security challenge and said the Chinese are working to undermine global order, a message in sync with Biden’s pleas to confront Beijing on China’s trade, military and human rights practices.

In a summit statement, the leaders said that China’s goals and “assertive behavior present systemic challenges to the rules-based international order and to areas relevant to alliance security.”

The heads of state and government expressed concern about what they said were China's “coercive policies,” the opaque ways it is modernizing its armed forces and its use of disinformation.

The NATO leaders also took a big swipe at Russia in their communique, deploring what they consider its aggressive military activities and its snap wargames near the borders of NATO countries as well as repeated violations of their airspace by Russian planes.

They said that Russia had ramped up “hybrid” actions against member countries by attempts to interfere in elections, by political and economic intimidation, by disinformation campaigns and “malicious cyber activities.”