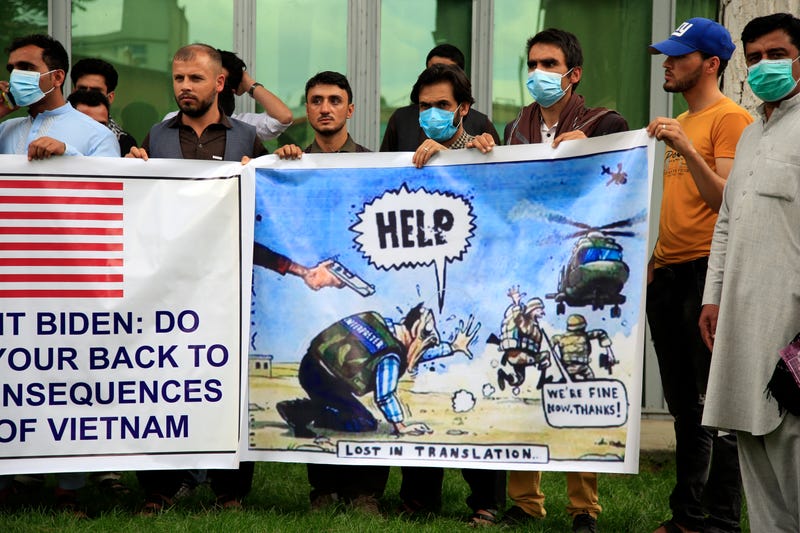 SAN DIEGO (AP) — In the chaotic, final hours of the Vietnam War, the U.S. evacuated thousands of South Vietnamese who supported the American mission and were at risk under the communist government.

With U.S. and NATO forces facing a Sept. 11 deadline to leave Afghanistan, many are recalling that desperate, hasty exodus as they urge the Biden administration to evacuate thousands of Afghans who worked as interpreters or otherwise helped U.S. military operations there in the past two decades.

Despite unusual bipartisan support in Congress, the administration hasn't agreed to such a move, declining to publicly support something that could undermine security in the country as it unwinds a war that started after the 9/11 attacks.

“We have a moral obligation to protect our brave allies who put their lives on the line for us, and we’ve been working for months to engage the administration and make sure there’s a plan, with few concrete results,” Republican Rep. Peter Meijer of Michigan said during a House hearing last week.

Lawmakers have urged the administration to consider temporarily relocating Afghans who worked for American or NATO forces to a safe overseas location while their U.S. visas are processed. Some have suggested Guam, a U.S. territory that served a similar purpose after the Vietnam War. Kurdish refugees also were flown to the Pacific island in 1996 after the Gulf War.

Guam's governor recently wrote to President Joe Biden to say the territory was ready to help if needed.

The Biden administration for now is focusing on accelerating a special visa program for Afghans who helped U.S. operations and pouring resources into relieving the backlog.

“We are processing and getting people out at a record pace,” White House press secretary Jen Psaki said Wednesday. “We are working with Congress right now to streamline some of the requirements that slow this process down and we’re doing the kind of extensive planning for potential evacuation, should that become necessary.”

Members of Congress were expected to raise the issue Friday, when Afghan President Ashraf Ghani comes to Washington to meet with Biden and lawmakers.

Zalmay Khalilzad, the State Department’s special representative for Afghanistan reconstruction, warned lawmakers in May that “the departure of all educated Afghans" would "signal panic" and hurt the morale of the country's security forces.

“This is a delicate, complicated balance that we have to keep," Khalilzad said.

Democratic Rep. Jason Crow of Colorado recently introduced legislation that would nearly double the number of visas available this year, to 8,000, and ease eligibility requirements.

But he said congressional action will not be quick enough or sufficient.

Even if the legislation passed immediately, the number of visas would fall far short of the estimated 18,000 Afghans waiting to be processed. That figure does not include their spouses and children, who would bring the total to about 70,0