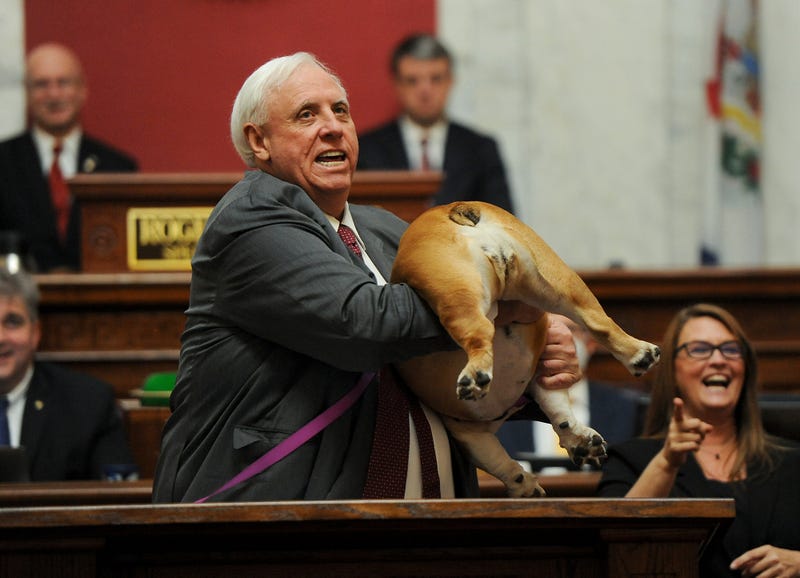 The 70-year-old Republican governor ended his televised State of the State address Thursday night by lifting up his English bulldog and flashing its rear end to the cameras and crowd.

“Babydog tells Bette Midler and all those out there: Kiss her heinie," Justice said, grinning as people applauded and some gave him a standing ovation.

“Absolutely too many people doubted us," he said. "They never believed in West Virginia. ... They told every bad joke in the world about us.”

The crowd in the House of Delegates gallery included lawmakers, state Supreme Court justices, agency heads and members of the high school girl's basketball team Justice coaches, who were sitting in the gallery.

Midler shot back in a tweet with a ranking of states from an unnamed source showing West Virginia near the bottom in health care, education and the economy. Said Midler, the dog's heinie would make a better governor, though she used a stronger word than that.

Not everyone was amused by Justice. In a tweet, West Virginia Democratic Del. Shawn Fluharty called the governor's move “embarrassing and beneath the office.”

“The @WVGovernor brought his Babydog and pony show to the State of the State and pulled this stunt as some bold statement. It was nothing short of embarrassing and beneath the office,” he said. “Jim Justice habitually lowers the bar of our state. They don’t laugh with us, but at us.”

Manchin, a Democrat, effectively tanked his party’s signature $2 trillion domestic policy initiative that would have poured billions of dollars into child care, health care and other services.

“What #JoeManchin, who represents a population smaller than Brooklyn, has done to the rest of America, who wants to move forward, not backward, like his state, is horrible,” Midler tweeted. “He sold us out. He wants us all to be just like his state, West Virginia. Poor, illiterate and strung out.”

After receiving backlash, Midler apologized “to the good people of WVA” for her “outburst" in follow-up tweet later that day.