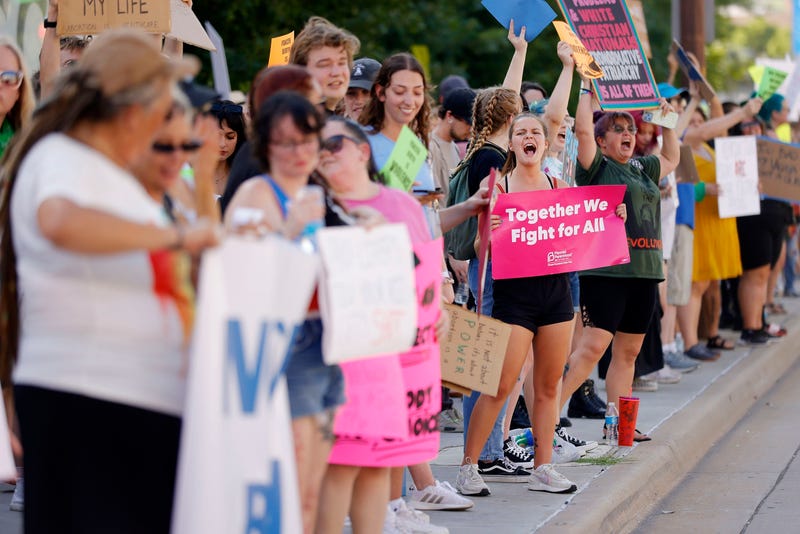 OKLAHOMA CITY (AP) — Roger Coody has no legal training and his political experience until recently had been limited to registering people to vote. Now, the Oklahoma hairstylist is pushing a ballot proposal he wrote that would make abortion access a constitutional right in his deeply red state, where Republican lawmakers have banned the procedure in nearly all circumstances.

It’s part of a growing trend across the nation to put reproductive freedom to a popular vote after the U.S. Supreme Court struck down Roe v. Wade, which had guaranteed the right to abortion nationwide for nearly 50 years.

“I don’t ever want to see anybody else’s right stripped away from them, because you never know when it is going to be yours,” said Coody, who said women who have been instrumental in his life inspired his foray into politics. “I am just trying to do my best to change things.”

It won’t be easy. Having overcome the initial hurdle where someone can protest a petition's legality, the Tulsa man now needs approval from the secretary of state’s office. He then will have 90 days to gather more than 173,000 signatures of registered voters who want to put abortion rights to a vote. Campaigns for ballot questions can cost millions of dollars, and each signature must be verified before the governor schedules an election.

Republican state Rep. Jim Olsen, who wrote the bill to make it a felony crime to perform an abortion in Oklahoma, said he recognizes the right of citizens to launch an initiative petition, but added that "basic morality should not be argued from a standpoint of majority vote.”

Coody's effort comes after voters in six other states this year rejected measures to restrict abortion access or supported efforts to protect it. Those states included liberal California and Vermont, but also more conservative Kansas and Kentucky, as well as swing-state Michigan. In Montana, voters rejected a measure that would have required health providers to take steps to save the life of an infant born alive, including after an attempted abortion.

The American Civil Liberties Union has been contacted by partners in at least a dozen states regarding similar campaigns, said Carolyn Ehrlich, a senior political strategist with the group. Such ballot initiatives can serve as a “roadmap in states where the legislature is a roadblock,” she said.

Supporters of abortion access have also started the process of trying to get measures on the ballot in New York in 2023 and South Dakota — which has an abortion ban — in 2024.

In Virginia, Democrats who control the state Senate plan to advance legislation that would start a multiyear effort to enshrine the right to an abortion into the state constitution. But it would almost certainly be voted down in the GOP-controlled House.

Democrats who control New Jersey’s state government have wrestled over putting a question on the ballot next year.

The Oklahoma effort is different than in many other places because Coody is looking to overturn an existing ban.

He tailored the proposal to follow state requirements while mimicking aspects of this year's successful proposals, he said.

“If these states can get it done, then I know that we can too,” Coody said.

Citizens and advocacy groups in Oklahoma have had several successes in recent years using the initiative petition process, which is outlined in the state constitution, to bypass the Republican-controlled Legislature and put progressive ideas popular with voters on the ballot.

In one of the most surprising policy shifts in the conservative state, marijuana supporters in 2018 managed to successfully pass one of the country’s most liberal medical marijuana programs. The question was approved by 57% of voters and opened the state to a booming industry.

Other ballot measures have enshrined Medicaid expansion into the state’s constitution and reduced penalties for drug possession and low-level property crimes, in both cases circumventing the Legislature.

Any successful ballot initiative, particularly for a constitutional amendment, would be very difficult to pull off without significant financial support and a well-developed infrastructure that includes volunteers and attorneys or other experts familiar with the legal process, said Amber England, a political consultant in Oklahoma who successfully spearheaded an initiative to enshrine Medicaid expansion into the Oklahoma Constitution.

“Oklahoma’s initiative petition process is one of, if not the most difficult, in the country, specifically because they give us 90 days to collect the number of signatures necessary,” England said. “It’s a very difficult process, and it’s one of the reasons it’s been done so few times.”

England said supporters of Medicaid expansion in Oklahoma likely spent more than $5 million on the effort.

Oklahoma state Rep. Mickey Dollens, a Democrat, said timing and strategy will be important in getting fundraising and support. Dollens plans to file a resolution to put abortion access on the ballot in an effort to gain momentum for the citizen-led movement.

“Oklahoma is arguably the reddest state in the country, but the people of Oklahoma love liberal ideas,” Dollens said. “This is why the people have to pretty much do the politicians’ jobs and take measures into their own hands.”