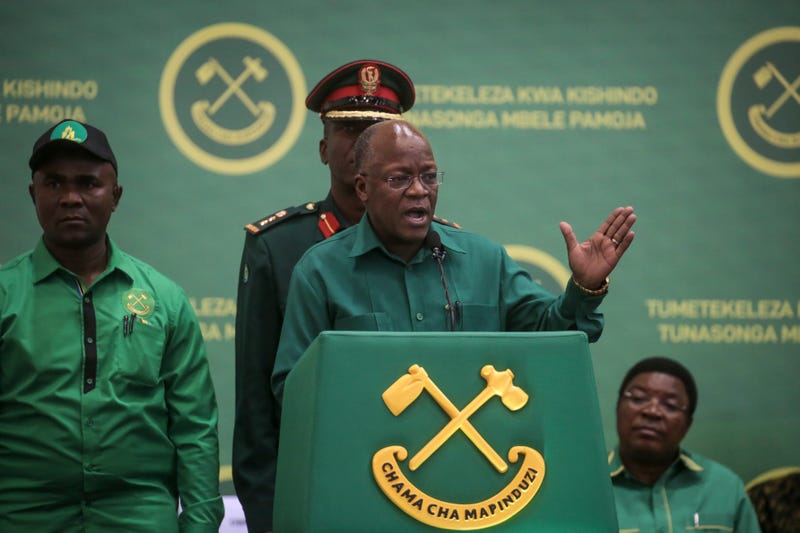 NAIROBI, Kenya (AP) — Tanzania's opposition faces a new obstacle in its quest to unseat President John Magufuli in Wednesday's election: It says the government has made it difficult to accredit thousands of opposition electoral observers who want to ensure the vote is fair.

“Without them, fraud can occur easily," Zitto Kabwe with the ACT Wazalendo party, a major player in an opposition coalition, told The Associated Press. He warned that the issue could lead to violence, saying his party won't allow polling stations to operate without the observers, “and that's why it's an explosive issue.”

At stake is one of Africa's most populous and peaceful countries and, at least before the COVID-19 pandemic, one of its fastest-growing economies. The populist Magufuli has been criticized for severely stifling dissent since his 2015 election win, notably barring opposition parties from holding most public gatherings.

The president leads the ruling Chama Cha Mapinduzi party that has held power for decades, and the opposition's best chance of an election win comes in uniting behind a single candidate. But that hasn't been easy.

The two leading opposition parties, ACT Wazalendo and CHADEMA, finally overcame differences in ideology and ambition and last week to unite behind Tundu Lissu of CHADEMA, who this year returned from exile. He had fled to Belgium after a 2017 assassination attempt in which he was shot 16 times.

Kabwe called Lissu the most popular candidate among the 15 presidential hopefuls, citing the crowds that have attended his rallies and discussions with fellow Tanzanians.

“It’s quite clear if the election is free and fair, it's going the Lissu way,” Kabwe said. “However, the playing field is not favorable to the opposition. There are a lot electoral gimmicks and the like."

Lissu was banned from campaigning for a week earlier this month by authorities. The National Electoral Commission, whose members are appointed by Magufuli, said the suspension was punishment for making what was deemed seditious statements. Lissu was accused of claiming that Magufuli had convened a meeting with election officials.

Opposition parties say some other candidates were unfairly disqualified from running.

And the CHADEMA leader, Freeman Mbowe, was attacked by unknown assailants in June after he accused the government of covering up the extent of Tanzania’s coronavirus outbreak. Magufuli has drawn international attention for declaring victory over the virus, mainly through prayer, while the government stopped publicly updating its infection numbers in April.

A Tanzanian government spokesman did not respond to a request for comment on the allegations that authorities have disrupted opposition campaigning and electoral observation.

Efforts to unite the opposition for this election have fallen short of the teamwork ahead of the 2015 vote. This time around, other significant political parties like the Civic United Front and NCCR-Mageuzi aren't joining an alliance, in part because of internal disputes.

Magufuli won the 2015 election with 58% of the vote while the opposition alliance candidate, Edward Lowassa, took 40%.

Still, after the 2015 defeat many opposition leaders, including Lowassa, joined the ruling party.

Within a year of riding into the presidency on popular calls for reforms to tackle corruption, Magufuli consolidated power. He has weakened Tanzania's courts with his appointments, the U.S. Department of Defense's Africa Center for Strategic Studies wrote last month. And last year the government withdrew the right of citizens to petition the African Court on Human and Peoples’ Rights and the East African Court of Justice — both based in Tanzania.

Human rights groups say Magufuli's administration has curtailed the work of media and civil society, limiting freedom of assembly and expression. Speaking publicly on any topic that the administration has deemed sensitive can lead to a media outlet's deregistration or a critic's imprisonment.

Coverage of Wednesday's election will be restricted after the government amended laws to require international radio and television broadcasters to have licensed local partners to get the regulatory body’s permission to air content, Amnesty International has said.

Meanwhile, some high-profile international election observers won't be watching the vote. “Unlike 2010 and 2015, the national authorities have not invited the EU to do it,” said Emilio Rossetti with the European Union delegation to Tanzania.

Other groups, including the Catholic church, have been denied accreditation, said Abubakar Zein Abubakar, a former legislator with the region's East African Legislative Assembly: “Those who seem to be independent have been denied the opportunity."

“This is going to be an election without observers,” opposition leader Kabwe told an online event last month. “As we have seen, the election has already been stolen before the voting day.”

According to Tanzania’s election authority, more than 29 million voters have registered to vote on Wednesday.

Maria Matembe, a prominent Ugandan lawyer with Tanzania Elections Watch, warned that while Tanzania in the past has seen cases of post-election violence, reports of pre-election violence and hate speech this time around have heightened tensions.

The group cited police intimidation of candidates including Lissu.

The U.S. ambassador to Tanzania, Donald J. Wright, in a statement Friday said the U.S. has heard reports of Tanzanian government and security agents disrupting candidates' ability to campaign freely.

“As we get closer to election day, the pace and severity of these disruptions is quickening and deepening,” he wrote. “We have seen political violence, restrictions on media and a candidate certification process that, by all appearances, gave a clear advantage to the ruling party."